Camp residents are calling on the UN and U.S. government to respect their moral and legal responsibilities vis-a-vis their safety, security and rights, and also take action to stop the Iraqi forces’ approach.

Liberty Is Not Free

This camp, with laws imposed by the Iraqi government similar to that of a prison, is ironically dubbed Liberty, in which thousands of Iranian dissident members of the main opposition to Tehran, PMOI, are residing. These refugees, one third of whom are women, were mostly educated and graduated from universities in Europe, the United States and various Iranian cities. However, they have dedicated their lives to establishing freedom and democracy in their country, and to rid their land of the viciousness and barbarity of the ruling mullahs. The Iranian mullahs are known as the godfather of ISIS and Islamic fundamentalism.

The residents, in their daily rallies, raise placards demanding an end to the logistics and medical siege enforced on their camp, and also condemn this inhumane blockade. They warn the West about Iranian regime-linked terrorists in Iraq taking advantage of the current unrest and insecurity in the country by targeting their camp.

Liberty residents are deprived of meeting their lawyers or reporters, and even their families cannot enter the vicinity to see their loved ones. This is despite the fact that based on a Memorandum of Understanding (MOU) signed between the UN and Iraqi government, there must be 24/7 monitoring on the residents’ human rights situation. However, this is only carried out for one to two hours a day and only on some days of the week.

The dissidents were forced by the United Nations and the Iraqi government to evacuate their 26-year long home by the name of Camp Ashraf, and transfer to Camp Liberty.

With the signing of the MOU, the UN and U.S. government committed to Camp Liberty residents’ safety, security and human rights until the resettlement of the very last individual outside of Iraq and in a safe location. Moreover, the Iraqi government became committed to protecting the residents’ property – that they were forced to leave back in Ashraf – and allowing them to sell any items whenever they wish.

Several years on, following a bloody attack by forces subordinate to former Iraqi Prime Minister Nouri Maliki against Ashraf on 1 September 2013 – carried out at the behest of the Iranian regime – 52 of the remaining residents in Ashraf were massacred and their property was looted and plundered; the property that was supposed to be protected.

“We have gathered here today to raise our voice against the inhumane medical siege imposed on Camp Liberty, which has to this day taken the lives of 24 residents,” says a woman in the rally. “We have no security and protection in the face of terrorist attacks by elements linked to the Iranian regime in Iraq that are carrying out numerous crimes. The UN and US government, who are legally and morally responsible, based on their commitments, must guarantee our security,” she added. 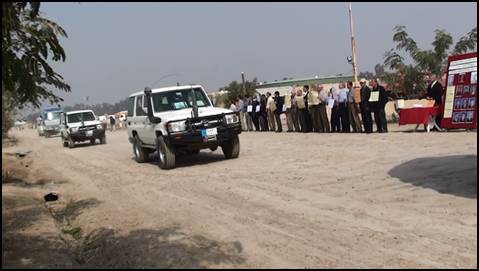 “We in this camp are living under very harsh conditions and are under a logistical siege,” said Mohammad. “Iraqi security forces are preventing the delivery of fuel, especially gasoline, into the camp and we are not able to use the already limited number of vehicles we have for our injured and disabled residents here. Even in emergency situations we don’t have gasoline needed to transfer a patient to the clinic inside the camp. We call on all international organizations and the U.S. government to intervene immediately and lift these limitations.”

Coincidently, while writing this story, the UNAMI monitoring team enters the camp and passes the line of protesters without stopping. The residents attempt to show their placards to the UNAMI representatives so they would understand their problems and bring about changes in the inhumane conditions in the camp. But unfortunately, this day, as in all the days before, and probably after, the pressure and suffering is repeated for the residents, because UNAMI does nothing.

These determined residents continue their protests and never forgo their rights. There must be an end brought to silence and inaction by the UN and the US government. The lives of the people in this camp are at serious risk.