Mr. Boumedra said in a Conference in Paris on August 3 (last week) that: “UN has led a campaign to vilify residents of camp Ashraf.” He reiterated that the bloodshed in Liberty could be prevented”

Six months after the February 9 rocket attack, the Iraqi government has prevented the provision of the minimum security requirements for which the residents of camp Liberty were willing to pay. These minimums (including the return of the T-walls, bringing small 2x2m2 bunkers into the camp, the transfer of protective helmets and vests and minimum medical equipment from Ashraf to Camp Liberty, granting permission for construction in Liberty, and increasing the Camp’s area) have been raised repeatedly with the U.S., UN and Iraqi officials.

After the deadly February 9 attack on camp Liberty, the residents have declared time and again and written to the U.S. and UN officials that the primary and most urgent issue at Liberty is their collective security, which could be ensured by temporarily transferring all of them to the U.S., Europe or camp Ashraf. Until this is achieved, resuming the interviews and piecemeal resettlement would give the appearance of normalcy and ignoring the issue of security, which would pave the way for another massacre. The attacks (on April 29 and June 15 which left two dead and 70 injured) verified this concern.

The full cooperation of the Iraqi government with the terrorist Quds Force in these attacks and the planning for further assaults, coupled with obstructions by government of Iraq in the provision of minimum security requirement has made the situation in camp Liberty more perilous Secretariat of the National Council of Resistance of Iran announced on 5 April 2013 that after his visit to Iraq, Mullah Moslehi, mullahs’ intelligence minister, had stressed in his report to Khamenei’s office, Maliki and Faleh Fayyaz (Iraq’s National Security Advisor) have reassured him that they would treat residents of Camp Liberty in the harshest way and that returning of the protective T-walls, extending the area of Camp Liberty and construction in the camp, as well as entering of sandbags requested by PMOI to increase the security factor in Camp Liberty would be prohibited.” 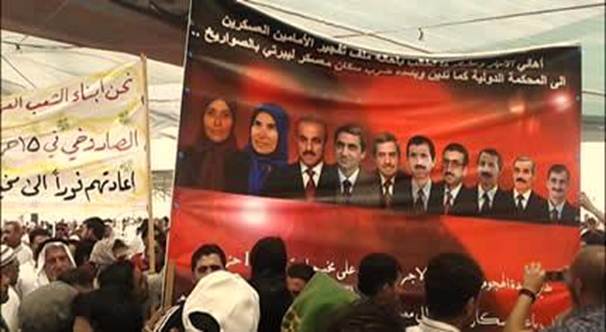 On May 3rd, Dr. Alejo Vidal Quadras, Vice-President of the European Parliament and President of International Committee In Search of Justice, wrote U.S. Secretary of State, “Firing of 20 missiles at Liberty on April 29, that fortunately left no human casualties, showed once again that Liberty residents have no security and Liberty is prone to massacre at any given time…the residents’ vulnerability is much higher than that of regular Iraqi citizens because all there is at Liberty are trailers, the population concentration is very high, and more importantly, due to prison conditions at Liberty, the residents have no escape and are confined to Liberty’s perimeters at the time of danger.”

Ashraf and Liberty residents are all protected persons under the Fourth Geneva Convention and the U.S. government signed an agreement with each and every one of them in 2004 that in exchange of disarming them, it will protect them until their final disposition. Moreover, Ashraf residents, with the guarantee of the U.S. government that it would support their safety and security in Liberty (Four party agreement of August 17, 2012) were transferred to Liberty. Secretary Clinton stated on December 25, 2011 that U.S. diplomats will visit the Liberty regularly and frequently and the US officials promised to have a robust presence in Liberty, which has been quickly forgotten.

The United States and the United Nations in view of international law, in view of law derived from bilateral and multilateral compacts, and politically are thoroughly responsible for protection of PMOI members in Liberty and Ashraf: In the quadrangle agreement between the U.S., UN, Iraq and Ashraf residents on 17 August 2012, U.S. obligated itself to support “safety and security” of residents. Based on this agreement groups six, seven and eight went from Ashraf to Camp Liberty. Based on repeated statements by UNHCR, all Liberty residents are asylum-seekers and people of concern and should enjoy international protection.

In its March 1, 2013 statement UNHCR stressed the need to provide a safe and healthy environment to residents. Testifying before Congress on April 17 and 18, the U.S. Secretary of State John Kerry, said, “We have contacted countless countries [regarding the resettlement of Liberty residents]; we have been refused by countless countries.” This clearly proofs that camp Liberty under the pretext of TTL (Temporary Transit Location) is deceptive and a failed project with no prospect for any resettlements of residents to third countries

Given the abovementioned and the fact that similar attacks to those on February 9, April 29, and June 15 may happen at any moment and any day, residents of Liberty once again call for immediate action by the international community, especially the U.S. and the UN, to return all Liberty residents to camp Ashraf and their transfer from Ashraf to third countries.