Women in Camp Liberty protesting their stolen property in Iraq

A group of women in Camp Liberty, a refugee site neighboring Baghdad airport where over 2,500 Iranian dissident have taken refuge, held a protest rally condemning the plundering of their property by Iraqi forces and militants linked to the Iranian regime.

They called on the United Nations and US government to act based on their legal and moral commitments given to the residents to transfer their remaining property from Ashraf to Camp Liberty and make arrangements for their selling.

The protesters, all being women, referred to the fact that they were prohibited from transferring their property from Ashraf to Liberty, and their selling to provide for their daily necessities in the new camp, along with their resettlement in other countries, all despite the agreements made between the relevant parties including UNAMI, US government and Iraqi government and the residents.

However, their properties and assets are being plundered and stolen by Tehran-linked militants and Iraqi forces. In this rally the residents held posters emphasizing on the agreement signed between the Iraqi government and UNAMI for the transfer or selling of their property after their settling in Camp Liberty.

The bloody 1 September 2013 massacre at the hands of the Iraqi forces in Camp Ashraf that left 52 of these residents brutally murdered, while seven others – including six women – were taken hostage.

Following this tragedy UNAMI and the US government guaranteed to the residents their property in Ashraf would be sold under UNAMI supervision. Quotes from this agreement were included on the protesters’ posters in this rally. Description: Description: DSC00018 “GOI shall allow the residents to sell their property at any time,” read the large poster.

“Following the September 2013 massacre the Iraqi government and UNAMI signed an agreement ensuring us we would be able to sell our assets or have them brought to Liberty,” said a resident.

“However, our assets are now being plundered in Liberty and this agreement has been violated, and we are gathered here today to protest this inaction by UNAMI, because UNAMI officials are silence in the face of the plundering of our property in Ashraf.” 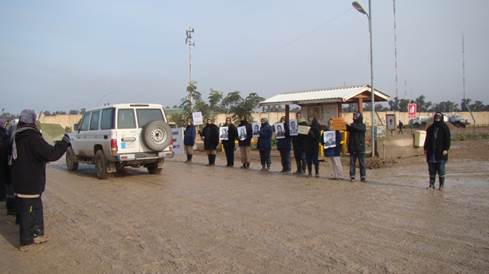