One of the wonderful things about working with The Hollywood Sentinel is having a work-related reason to enjoy events like Anime Expo 2013. Although I’d seen the convention-goers walking around in bizarre costumes I’d lumped together with “Star Trek,” “Star Wars,” and “Japanese animated characters,” I’d never really considered attending the convention to see what it was all about, until this year, on the 3rd of July, when I stopped to talk to some of the fans who were waiting in a long line snaking around the outside of the building. The fans’ intelligent enthusiasm and detailed knowledge of the games, comics, and films (or “manga”) from whence they drew their inspiration convinced me that the convention was a phenomenon to explore. Watch the video in the link here below.

If you would like to discover the world of anime films at your own convenience, from your personal computer, a good place to start is at Crunchyroll, where you can sign up for a free fourteen day trial to watch streaming Japanese broadcasts. 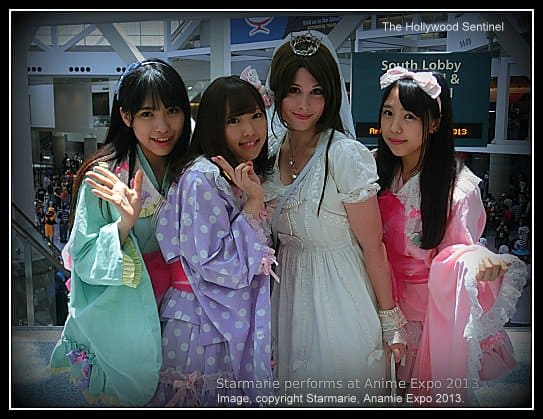 In the U.S, most people think of animation as “kid’s stuff,” but in Japan, the animated films deal with adult subjects like evil, crime and the underworld, life after death and spirituality, and the destruction of our natural world. Animated films in Japan are enjoyed by people of all ages and diverse backgrounds.

Cosplay, if you are not familiar with the term, refers to adults (mostly young adults) who dress up as their favorite characters from their favorites stories and interact with each other in character. In other words, adults doing what little kids do naturally: playing dress up and fantasy games as a way of exploring reality without the confines of social norms and expectations which can be so constricting.

I created my own costumes and characters for the entire four days I attended. It was so much fun, being surrounded by fluid creative intelligence. The first day I went as the Goddess of Painting, a Kali/Native American-inspired being who walked around with a stack of paintings balanced on her head and later returned back to the scene to dance her socks off until three in the morning. The second day I went as a doll. With my “doll eyes” I noticed all the darling, delicate young girls creating tableaux vivants in the lobby, holding perfectly still as hordes of photographers feasted on them with their eyes and lenses.

The third day I went in sweatpants and a sport top channeling the energy of a (male) chauvinistic fitness instructor and spent most of the time talking to male martial arts experts, jugglers, and others, including anime artist/portraiture expert Felipe Smith, a fellow School of the Art Institute of Chicago alumni, who was there in a professional context, sponsored by the Nexon booth. I waited in line half a day for the chance to have Felipe draw me. The gift of this portrait is worth more than I can express with a mere “thank you” to Felipe, Nexon, and Maplestory. The picture helped inspire the creation of a future anime platform, now in the early stages of development.

The fourth day I worked on two characters who will be central to the plot of this new project; a ninja assassin and her evil archenemy.

Most of the 60,000 plus fans within the exhibitor hall were artistic to some degree. An entire section, called “Artist Alley,” was devoted to the sale of original art works including illustration, painting, and sculpture; all with anime-related themes. Pepper-tea was one of the many Artist Alley exhibitors I particularly liked.

I love seeing craftspeople do business on their own terms and succeed. A few people I’d like to cheer on in their quest for fame and fortune include Nate Mitchell and his team at www dot squidkidsink dot com. They had me with the motto “For geeks, by geeks,” and as an old-school sound geek, the product homage to analog was just icing on the cake. (Prepare for “hugs of death!”)

I felt like I’d stumbled on a diamond of hand-crafted purity when I found Dragon Pets, which you can explore at www dot MyDragonPets dot com. This company is run by Richard and Tyra Terry, who never make the same dragon twice. Specialty, baby, juvenile, and mature dragons are all made out of non-toxic materials and are safe for ages 5 and up. This is a family business, so you’re really doing good on all levels when you support them. They even have dragons you can wear around your arm!

I don’t know how to get more blunt: When building a fan base, free is where it’s at, folks. I love the idea of free web comics. As long as your mom isn’t going to kick you out of the basement anytime soon, if you want to build your own cartoon empire, why not build a free online comic book?

There were few fans at the Expo who were as obsessed, articulate, and willing to monologue as the Homestuck cosplayers. There’s some cognitive dissonance, which intrigues me, created by the dichotomy between the fans’ sophisticated cosplay and the visual style of the comic, which looks like a low budget version of South Park.

To read the rest of this story, as well as to get direct links to those mentioned herein as well as others, visit The Hollywood Sentinel dot com at the link below at the bottom of this page, and view the table of contents tab to the left of the screen for the Anime story.

You can register now and save for next year’s Anime Expo, which is brought to you by the SPJA. According to their website, the Society for the Promotion of Japanese Animation (SPJA) is a non-profit organization dedicated to popularizing the unique and deep culture that surrounds of Japanese animation. The SPJA was founded in 1992. Anime Expo is the largest anime event in North America, and the price of admission is nominal compared to the rich and rewarding experience that is enjoyed by a growing and devoted legion of fans. See: www.anime-expo.org.