Maika is a delightful children’s adventure, brought to us all the way from Vietnam. Despite a lack of originality, it stays the course, proving that if you give the right actors sparkling dialogue, the plot doesn’t have to work that hard. The right actors on this occasion are three budding thespians, who fill the screen with such charm the grown-ups don’t get a look-in. 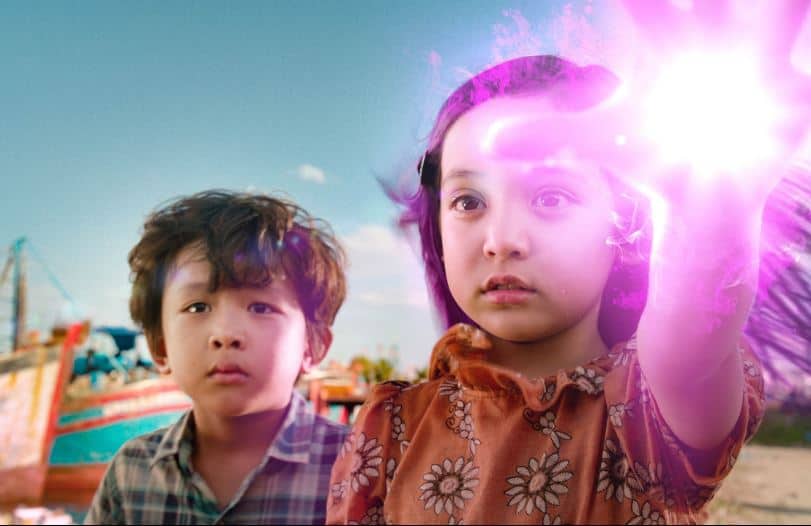 Hung (Lai Truong Phu) is an only child whose mother delights in filling his head with magical tales. Her favorite is The Moon Cake, which inspires her to nickname her treasured son ‘Little Star.’ Just before she tragically dies, she tells him that if ever he’s missing her, he should look to the sky. Every moment of the day, she’s going to be there, watching him.

Hung’s widowed father (Ngoc Tuong), does his best to take care of his son but it’s a struggle. One day, he’s so exhausted, he forgets he promised to take Hung to watch a meteorite shower, so Hung goes alone. The young boy sees something mysterious fall from the sky and decides to investigate. To his amazement, he’s confronted by a young girl (Chu Diep Anh) who’s come to earth to find her lost comrade. She’s from the planet Maika and laden with special powers. Hung is entranced.

A movie about a young boy teaming up with an alien from outer space is obviously nothing new and, despite its oriental roots, Maika offers no new perspective. This is particularly surprising, as Vietnam is rich in fairy tales and legends that have, so far, not been exploited by the West. An orbiting cake with a Moon Girl aboard would be far more intriguing than an alien in a spaceship who will, sooner or later, have to ‘go home.’

While the highly appealing Hung and Maika take center stage, a powerful little bundle named Beo (Tin Tin) regularly slips in and fairly demands the audience’s attention. He makes his entrance as Hung’s adversary, but then when Maika falls absent, he steps in. It would have been so much more dynamic if the three kids had gone on their Big Adventure together. Beo’s pedal-to-the-metal attitude would have ensured they got in more trouble than even the filmmaker could have imagined.

Although this film is well worth a trip to the movies, the use of sub-titles might limit its success. The producers may have decided dubbing would detract from the actors’ appeal, but children’s reading ability is a bigger threat. When parents are deciding which film to take their kids to see, it could be they’ll decide to skip the one that risks two hours of “What does it say?” ringing in their ears.

ABOUT MAIKA
Vietnam’s first children’s sci-fi feature and the country’s second-ever entry to the sci-fi genre. The film is based on a beloved 1970s Czechoslovakian television series that became a cultural sensation in Vietnam throughout the 1980s and 90