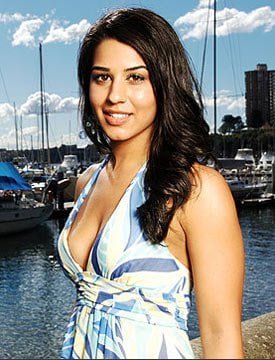 The show is an MTV based show, which gathers a handful of 20-something year olds and puts them in a house, alternating cities every season.

The purpose of the show is to create chaos amongst the housemates. The housemates are not confined to a 24-hour in house only situation as seen on Big Brother.

Housemates are encouraged to drink and party in the streets of major cities and in their mansion-like adopted home.

A Muslim in The Real World does not come without controversy. There have been claims that MTV exploited her religion and color because of an array of complaints at MTV saying, “MTV don’t like black people…” and other complaints about no diversity on the show.

She was the only housemate with a dark complexion appearing on “The Real World: Sydney”; however MTV claims that they had requested her for an interview when she did not ever intend to audition because of her charm.

Parisa is a Muslim woman from an Iranian background; she is described as a proud American. She has publicly sung the national anthem at several sporting events.

Parisa has a degree in international studies from New York University but likes to sing, has a passion for it and is striving to make a career of it.

Critics praised Parisa for her mature and blissful voice. A former classmate also describes her as very “intelligent” and “nice.”

Many chat forums and fan-based sites have also praised her talent and personality on the show. She is supposedly the first housemate not to indulge in unusual behavior that housemates normally participate in on the show, citing her family and herself. She said she did not do anything in the house to embarrass herself or her family.

Parisa Montazaran is her full name and fans have already begun posting her songs on Youtube and other websites.

To see Parisa, you can click on the link to hear her sing the national anthem at a sporting event. http://www.youtube.com/watch?v=8JdqThlGEDE&eurl=

The singer/song writer currently appears on “The Real World: Sydney” on MTV.

Things to do in Brisbane

The Melbourne Cup – A Brief History of the Great Race

US Consumers to Benefit from New Zealand Wool Partnership