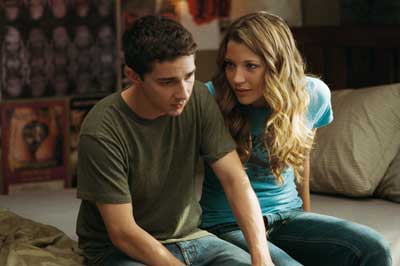 A year after surviving the car crash in which his father died, Kale (Shia LeBeouf) punches his Spanish teacher who made an offhand comment about the accident. The ill-advised assault and battery lands the 17 year-old in court where he is sentenced to several months of house arrest while wearing an ankle bracelet which will automatically send a signal to the cops if he leaves the premises.

To add insult to injury, Kale’s mom, Julie (Carrie-Anne Moss), confiscates his favorite electronic toys, like his Xbox and iPod, which leaves the lad little to do except gawk out of the window with his powerful set of binoculars. This turns out to be both a blessing and a curse, for one next-door neighbor just happens to be Ashley (Sarah Roemer), a cute girl his own age whom he quickly on develops a secret crush on. 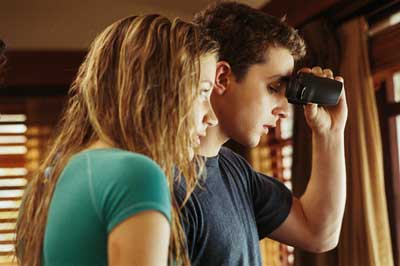 However, there’s something suspicious about the comings and goings of Mr. Turner (David Morse), the inscrutable loner living on the opposite side, especially since his ’67 Mustang matches the description of the car belonging to the suspect being sought for questioning in a string of murders. After noting a telltale dent in the automobile’s fender, Kale gradually becomes convinced that Turner’s a cold-blooded serial killer.

But because of the restrictions in his mobility, Kale is limited in his ability to snoop and he has trouble getting the cops to take his allegations seriously. So he enlists the assistance of, first, his best friend, Ronnie (Aaron Woo), and later, Ashley, in cracking the case.

Borrowing a page or two from of the Hitchcock classic Rear Window (1954), Disturbia is a riveting psychological thriller for the Internet Age which delivers as compelling a variation on the helpless voyeur theme as one might hope to find with leads this inexperienced.