The world-renowned anti-apartheid icon Nelson Mandela has died at the age of 95.

The former South African leader had been suffering from a recurring lung infection.

Mandela’s struggle for freedom and equality among blacks and whites in South Africa inspired leaders around the world.

Looking Back On Mandela’s Life

Mr. Nelson Mandela was trained as a lawyer. He became engaged in in politics after 1948 as South Africa implemented the system of racial apartheid. While initially espousing non-violent protests with the African National Congress (ANC), he eventually founded a militant organization and was behind a bombing campaign in the early 1960s. He was arrested and sentenced to life in prison in 1962.

Initially imprisoned in an 8 feet by 7 feet concrete cell with only a straw mat on which to sleep, Mandela’s imprisonment soon became an international cause. He was eventually released on 2 February 1990 after intervention by President F. W. de Klerk.

Mandela became president of the ANC in 1991, and was elected president of South Africa in May 1994, a position in which he held until 1999. During his time in office, he led the dismantling of the apartheid system, for which he was awarded the Nobel Peace Prize in 1993.

Mandela is survived by his wife, Graca Machel, six children, and 17 grandchildren.

Mandela had been sick for a long time. Earlier this year, South Africa’s Sunday Times ran a story on Mandela’s illness under the headline “It’s time to let him go.”

Samantha Power, the U.S. Permanent Representative to the United Nations said “Today, an eloquent voice has been silenced, a beautiful mind stilled, and a bountiful heart stopped. The epic soul of Nelson Mandela is now at rest. It is routine to suggest that the legacy of a man or woman will outlive that person, but in this case, the world will never be the same now that Nelson Mandela has occupied it. The example of his leadership – from prison to the presidency – from a land riven by fear to a people reconciled through truth and justice – will stand for all time.” 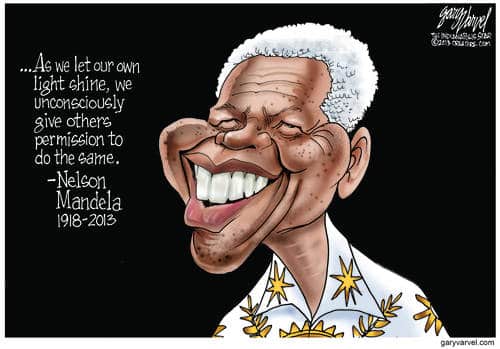 Mandela Had A Dream

Mandela was like and unlike another black man, Martin Luther King Jr. Unlike because MLK espoused non-violence – Mandela resorted to terrorism, which landed him in jail. In this regard, Mandela was more like Malcolm X and the ANC was like the Black Panthers. Like King, each man had a dream for their people. When Mandela took the reins of power, he kept his word that the transition would be peaceful.

Africa is engulfed in wars, not with white people, but with other black people. Many are starving. Many are enslaved. Many are refugees. There appears to be little outrage about this because the perpetrators are black and much of the division is between muslims and christians.

Ms. Power said “Nelson Mandela was a man of profound dignity. As we mourn his passing and celebrate his life, we must also find inspiration in his memory – striving daily to promote peace, freedom, and dignity for others.”

The world has a long way to go, and it is ignoring the lessons of the past, ignoring the ever-increasing population which will soon overwhelm the whole world and result in more wars, as the environment takes control over what humans fail to take control of.