The competitions department of Somali Football federation has announced that the country’s 2013 Super cup will be played at Stadium Banadir on the 17th of October. The official logo of the Super cup has also been unveiled.

Chairman of the SFF competitions department Ali Abdi Mohamed (Shiine) said in a press statement that Elman FC and Banadir Sports Club are very much luckier as they will be the first two clubs to exhibit at Stadium Banadir after the Carpet installation.

“The facility is still under construction, but the field is ready to host a competition. The SFF has taken the decision to hold the Super cup on the mentioned date, because waiting the completion of the rest of the construction will take longer and that is why we have taken the decision,” Mr Ali Abdi Mohamed said in his press statement.

The statement noted that after the carpet installation, this week’s Super cup match will be the first to be exhibited on the facility. The country’s division A league will follow in few days time as expected according to the statement. 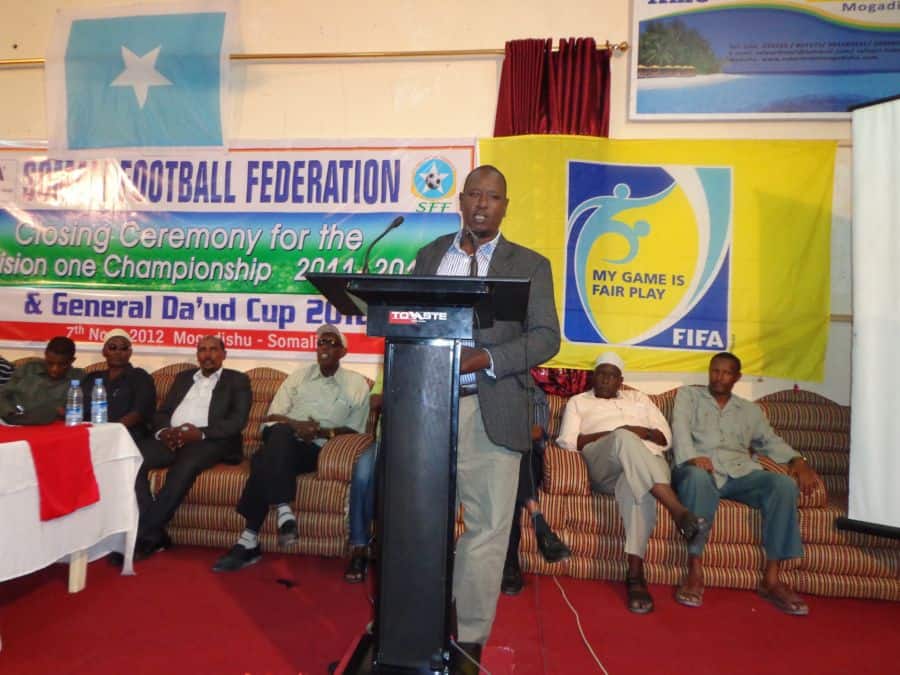 The Division A league is Somalia’s most populous sporting event.

“Dressing rooms, toilets, the post match press conference room, meeting areas and other important parts have already been reconstructed, but the VIP area which is very important for us is still under construction and we hope FIFA to complete it before the end of the year, but the facility will continue hosting competitions during the period,” Mr. Ali Abdi Mohamed stated in his press statement.

Hundreds of Somalis pay daily visits to the facility trying to know when the first competition will be held at Stadium Banadir.

“An exceeding number of Somalis are always coming here at Stadium Banadir and that is because they like football and in addition to that, the people coming here are very much interested in watching football competitions at a world class facility,” SFF competitions department chief Ali Abdi Mohamed expressed.

The ElmanFC versus Banadir Sports Club Super cup match will kick off at 03:30 PM local time on Thursday 17th of October 2013.