ECOTERRA says the MV FILITSA, a bulk carrier loaded with fertilizer, has been released after the pirates received a payment dropped by plane.

The report says it had been a very tense situation on board throughout the afternoon after a significant ransom had been dropped by plane. A pirate on board the MV Filitsa apparently told Reuters earlier they were expecting $3 million for the release of the cargo ship and crew.

An ECOTERRA marine observer said “The last pirate left at around 22:00 local time (19:00 UTC) and the vessel is supposed to sail free.” 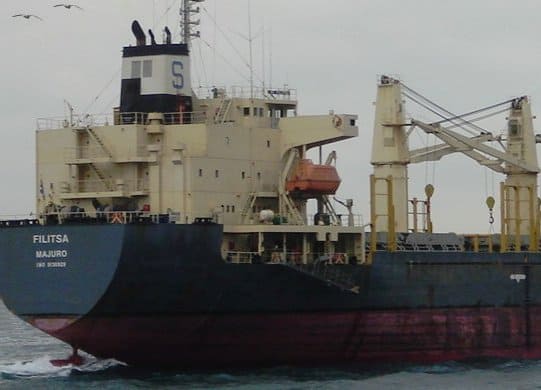 When the first pirate group left with the money, for safe areas on the mainland, without paying out those still on the vessel, and another group boarded, it was feared the piracy situation just would go into a new round.

Two helicopters from a nearby warship, were at one point seen hovering over the hostage ship. The helicopters were presumed to be American, because EU NAVFOR insisted they had no vessel nearby.

After night fell, the naval vessel backed off, and the remaining pirates rushed to shore.

The Marshall Islands-flagged bulker MV FILITSA loaded with fertilizer had been sailing from Kuwait via the United Arab Emirates (UAE) en route to Durban in South Africa when it was attacked and seized on Nov. 10, 2009 at a position 513 nautical miles north-east of the Seychelles.

The 1996-built, 23,709 dwt cargo-ship has a crew of 22, including three Greek officers, 18 Filipino seamen as well as one Romanian officer for whom the nightmare is now over.

The ship, held near Hobyo, belongs to the Greek company Order Shipping Co. Ltd. The company has not yet provided the full crew-list, nor has it confirmed the release.

ECOTERRA International is the Global Society for ECOlogy and sound ECOnomy, an independent, international civil society organisation, registered as a non-governmental organisation (NGO), working as humanitarian agency and in development.