A plan to supply the whole of Europe with clean solar power from desert regions in North Africa and the Middle East has now been debated in the House of Commons.

On Thursday, Dr Howard Stoate, MP for Dartford, described how, every year, each square kilometre of hot desert receives solar energy equivalent to 1.5 million barrels of oil. Multiplying by the area of deserts worldwide, this is several hundred times the entire energy consumption of the world. The key technology for tapping in to this cornucopia is the simple proven technique of “concentrating solar power” (CSP): using mirrors to concentrate sunlight to create heat and then using the heat to raise steam to drive turbines and generate electricity, just like a conventional power station. Solar heat can be stored so that electricity generation can continue at night. 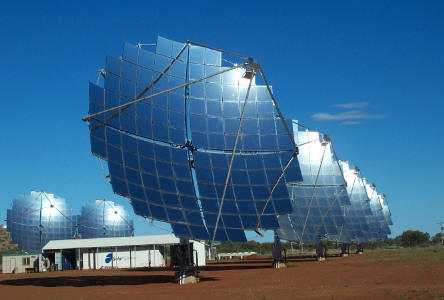 Quite apart from the transmission of solar energy throughout Europe, the Middle East and North Africa, the proposed ‘HVDC’ Supergrid would reduce wastage by allowing electricity to be transmitted from areas of surplus to areas of need, it would increase energy security because temporary shortfalls in any area could be covered from elsewhere, and it would help to match variable demands with variable supplies. It would also provide the means of transmitting electricity from large-scale but remote renewable sources such as off-shore wind farms, wave farms, tidal stream generators and the like. 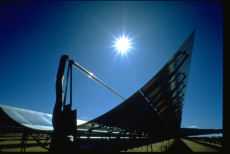 Dr Stoate said “Concentrated solar power is a concept of literally dazzling simplicity. It is an idea so simple, and with such extraordinary promise as a means of power generation, that it seems astonishing that in Europe we are only just waking up to its potential, more than 20 years after its first use in California.”

Responding to Dr Stoate’s speech, energy minister Malcolm Wicks MP said “The world has huge solar resources, on which concentrated solar power technology can clearly draw. … The Government will continue to follow developments in concentrated solar power and long-distance electricity transmission.” He said that Dr Stoate had made several interesting and important points and that he would like to be better informed on the subject.

The debate, entitled “Adjournment Debate: Concentrated solar power,” was held between 6 pm and 6.30 pm on Thursday the 28th of February 2008.

For 28 days, the debate will be available for viewing at http://www.parliamentlive.tv/Main/VideoPlayer.aspx?meetingId=1102 .

Further information about the DESERTEC concept may be found at www.trec-uk.org.uk and www.desertec.org.