According to a Kenyan police press statement, the fighters stormed the university at 5:30 Am and engaged with security. Gunfire rang out throughout the campus while students were still sleeping.

The attackers have taken scores of university students hostage and killed many others on Thursday.

The attackers shot indiscriminately while inside the university compound. Police officers who were guarding the students’ hostels heard the gunshots and responded. They quickly engaged the gunmen in a fierce shootout, but the attackers retreated and gained entry into the hostels.

Security forces were called in for reinforcement.

“At one point, the attackers cornered a building in which 360 students live, but some of the students escaped,” Nkaissery said.

“Kenyan forces cleared three of four dormitories and had cornered the militants in the last one,” the Interior Ministry explained.

“This is a moment for everyone throughout the country to be vigilant as we continue to confront and defeat our enemies,” Kenyan President Uhuru Kenyatta said.

The Somalia-based Al-Shabaab militant group claimed responsibility for the assault.

About 150 people were killed in the attack, according to the official Twitter account of Kenya’s National Disaster Operation Centre and Kenyan media reports.

The agency also reports on its Twitter account that plans are underway to evacuate the remaining students and others from the area.

The death toll suggests the attack was deadlier than an Al-Shabaab attack on the Westgate shopping center in Nairobi in September 2013 that left 67 people dead. 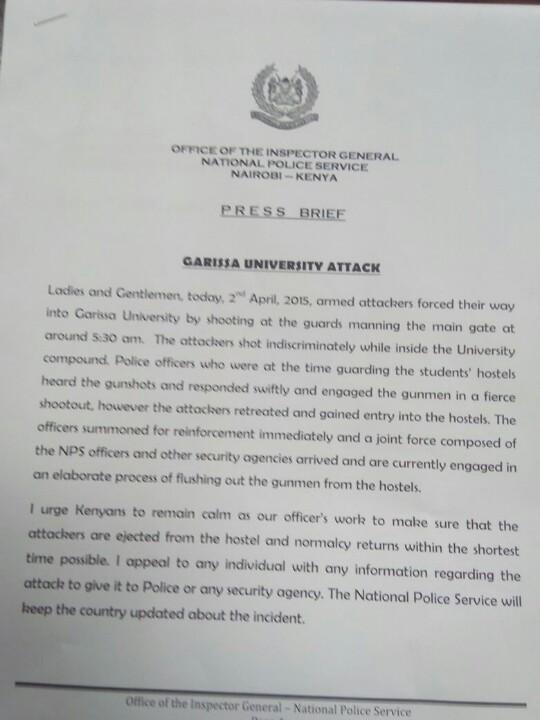 In Washington D.C., a State Department statement said “The United States strongly condemns al-Shabaab’s terrorist attack on Garissa University College in Kenya today. We extend our deepest condolences to the families and loved ones of the innocent victims who were killed in the attack. We also direct our thoughts to the many who sustained injuries.”