It would seem that Barack Obama’s hypnotic speeches are even more effective than we imagined.

Within 11 days of entering the White House, it was decided that Obama should be awarded the Nobel Peace Prize, even though there were some 200 candidates potentially more deserving for this honour.

Those present at the announcement of this award were clearly surprised (or would shocked be more accurate?).

It is generally accepted that the Nobel awards are given to people who have actually achieved something, but as we all know, Obama has only talked about Peace; he hasn’t actually done anything to achieve it yet. In fact, he is considering sending more troops to Afghanistan! 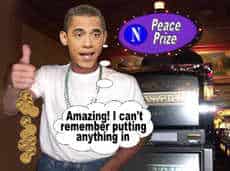 Obama claimed to be “humbled” at being selected for the Peace Prize, but perhaps embarrassed is the word he should have used? A better response would have been to say “I don’t deserve this award yet” and suggest giving the cash that comes with the award to those who have earned it.

As for the people who decide who get the awards, what were they thinking? They have made the award a laughing stock, which will no longer have any meaning or value. It has now become much like the “titles” that are given out in the UK every year (New Year Honours List), most of which go to people who have donated the largest amount of cash to a political party, or purely to friends of those who make the decision.

Political favours used to be more subtle, but the “Elite” no longer care about using blatant tactics on others. We shall witness another example of this shortly when Tony Blair is given the role of President of Europe. No campaign and no chance for the EU citizens to vote for a candidate. Blair will just appear and the rest will have to accept it!

Is this the “democracy” that everyone is fighting for? How does it differ from those countries that we are told have none?