A number of people have already suggested that Barack Obama’s popularity is not simply the result of well presented speeches, winning people over with his style and easy going manner, but something more sinister.

Having studied his speeches more closely, I would certainly agree that he uses hypnotic techniques on his audience, and delivers these in a very capable and effective way.

The methods he uses would of course go undetected by those who are not familiar with hypnosis, and even those who are, need to look closely at his actions to be absolutely sure.

If we look at his recent UN speech (Click Here to view), we will notice that he has a habit of clasping his hands together and bringing them down so as to make an audible noise. It is not that loud, but sufficient to be noticed by our subconscious minds (or those paying attention to detail). 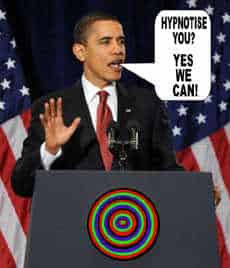 This noise does not occur every time he makes this movement, which suggests it’s not a habit he is unaware of and indicates a controlled action. We must also assume that a sound engineer (or his own people) might point out this “tapping,” for fear that it might distract the audience from the message he is delivering.

However, this has obviously not happened, as this “tapping” appears in other speeches as well, indicating that there is some other purpose to it.

Its purpose appears to be something called “anchoring,” a method used by some to place certain words in a person’s mind without their knowledge. This is more usually achieved by touching the subject whilst delivering the word.

Obama also uses a pacing method, which involves careful pauses in between certain words, and emphasizing others. These may seem very normal to most, but are extremely effective in manipulating the response of the listener.

In his UN speech, Obama “anchored” many words during the 38 minutes that it lasted. “Peace/peaceful” appeared 6 times, as did the word “people,” with “nuclear weapons” coming up 4 times. You may have noticed that in many of his earlier speeches he would begin to make a point by using the word “now.” There is absolutely no logical reason for using this word (which he normally follows with a pause), as the sentence would make perfect sense without it.

Whilst the actual speech that we hear has a purpose, the real message is hidden within the speech itself. Using the UN speech as an example, we can see a strong emphasis on war and nuclear weapons, and a call for the world to respond in order to achieve peace.

This may seem reasonable, but the message is not a request, it is a demand.

To fully understand the reason for the “anchored” words used (I counted more than 150), we would need to know the ultimate response that is expected. However, we can perhaps speculate that whatever the exact reason is, we are expected to work together as one to achieve what appears to be an “equal, democracy” (according to the anchored words). Could this be another way of saying NWO (New World Order)?

Similar tactics have been used in adverts for many years, using certain suggestions (or repeated phrases) to encourage us to buy a product. These can be very successful, but the technique Obama is employing is far more advanced and effective.

Unlike the hypnotist who performs the same feats on stage, Obama is not warning his audience of the tricks he is using and this is morally (and probably legally) wrong. It is quite likely that many others use such tactics, maybe even News readers?

To reduce the effects of hypnotic/suggestive methods, you need to accept that they may exist in almost any situation and you should pay as much attention to the way the message is delivered, as you would to the message itself.

It is sad that we need to take such precautions, but better than having our minds controlled without our knowledge. For those who think it can’t be done, you obviously haven’t seen Derren Brown at work. Click Here to see an example of how he projects the answer into your mind. If you are wondering how he does the first trick, here is a clue: “This is “A” letter of the alphabet”

Considering Obama has done little of any significance, before or after becoming President, we should all be wondering why he has obtained an almost religious like following. There are many film stars who have been dazzling us with their skills for years, but none have captured the public interest with quite the same ferocity (and speed). Perhaps this is further confirmation that something is wrong?

The next time you listen to Obama giving a speech (have you noticed how many he makes?), record it and watch how he does it before concentrating on the message. Do not make the mistake of thinking you can control hypnotic suggestions and concentrate on the message first; there are around 86 million people who probably thought that!