A recent article in the Daily Mail reported that a former Labour adviser (Andrew Neather) claimed that the government’s open-door immigration policy was designed to make Britain more multicultural and allow Labour to portray the Tories as racists, and at the same time was, in part, an attempt to try and humiliate Right-wing opponents of immigration.

With Jack Straw and Tony Blair (along with other familiar faces) involved in this plan, it is easy to accept it as fact. To increase immigration for any of the reasons given above is certainly serious and warrants an investigation, but is there more to this than simple politics?

Is it really likely that the Labour Party (or any of the mainstream parties) would flood Britain with immigrants to simply annoy the opposition? But what other reason could they have for doing it?

To discover the answer to that question, we have to accept that exactly the same thing is happening in the United States. They too are accepting a huge number of immigrants, which are putting a serious strain on resources, and these immigrants are also receiving preferential treatment. 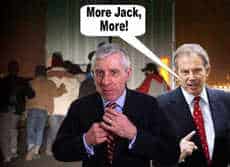 The question people are asking is why would any government want to purposely allow so many immigrants into their country, knowing the problems that it is causing?

Unfortunately, the answer to that is hard to believe, but as strange as it may seem, the purpose does appear to be a real attempt to cause civil unrest and financial ruin.

Yes, I know it sounds crazy that anyone would want to bankrupt a country and encourage its people to revolt against its government’s policies, but what other logical explanation is there for what is happening in the US and Britain?

There are many who believe that the current problems we are experiencing (Financial crisis, over-population through immigration, and even the viruses like Swine Flu) have been created on purpose, with the intention of making things so bad that the public will beg for help and accept almost any solution offered.

David Icke describes this tactic as “Problem-Reaction-Solution.” A group of people purposely create a problem, the public react (ask for help), and the same group provide a solution.

There are some who consider David Icke a little “crazy,” but if you take the trouble of listening to one of his many presentations (rather than listen to the propaganda), you will discover that his views make a lot of sense, backed up with factual information.

You may well have come across articles (or sites like David Icke’s or Rense.com) that discuss the “Elite” or talk about the “NWO” (New World Order). This is basically a group of very rich and influential people who seek a government that controls the whole world. Or to put it another way, a world that they control to increase their power and wealth (a dictatorship).

The key players in this group are people like the Rothschild family, but they are assisted by leading political figures such as: Tony Blair, Jack Straw, Lord Mandelson, Miliband, the former US President George Bush, the current US President Barack Obama, and certain Media owners and bankers. They have the power to start (and stop) a recession with just a few phone calls.

A country is controlled by the credit it can obtain, and those giving the credit dictate whether a country, company (or individual) survives or not. This is not something new, Nathan Mayer Rothschild (during 1813-1815) was instrumental in the financing of the British war effort, handling the shipment of bullion to the Duke of Wellington’s army in Portugal and Spain, as well as arranging the payment of British financial subsidies to their Continental allies. Through the commissions earned on these transactions, the Rothschild fortune grew enormously. In 1818, he arranged a Pounds 5 million loan to the Prussian government, and the issuing of bonds for government loans formed a mainstay of his bank’s business. He gained a position of such power in the City of London that by 1825-6 he was able to supply enough coin to the Bank of England to enable it to avert a market liquidity crisis.

Much of the Rothschild’s wealth (originally) was created by “juggling” with other people’s money. We can perhaps see another example of this with the Federal Reserve in the US, a private bank that prints paper money (which it lends) and receives “real” money back in the form of interest.

By creating financial chaos and unrest makes it easier to introduce new laws in which to deal with the problem. This could come in the form of “Martial Law” and an opportunity to create a “communist” type system later (much like that seen after the Russian revolution).

Unfortunately, we cannot expect any help from the mainstream political parties, as they are all controlled by the “Elite.” The appearance of being rivals is just an illusion for the benefit of the voters.

If we accept that there is a more sinister plan behind the increased immigration, and that the Conservatives or Liberal Democrats will almost certainly continue this madness (they haven’t offered any proposals to reduce immigration levels), there seems to be little choice but to elect a party that will take action. At the moment, the only Party offering a real solution in this area is the BNP (British National Party).

Britain’s problem is not just about the number of immigrants entering the country, even though that is a very serious matter, but the future control that the country will face as a result of the “Elite.”

Making such a political change will not be easy. Even if a Party like the BNP were to gain serious support in the General Election, how certain could the public be that the votes are counted honestly (a problem seen in the US).

All the mainstream parties have better funding and access to the Media, and this will be used to full advantage to block any “alternative” Party gaining success. We have seen this pressure applied already on the BNP and very few Newspapers or TV Channels (later) will report any Poll results that show rivals doing well (as happened to Ron Paul in the US).

There is clearly a strong interest in the BNP, but this would almost certainly be greater if there was less talk about “non-white” immigrants, and more emphasis on stopping immigrants (regardless of their colour) who seek to abuse the welfare system and replace Britain’s traditional values with their own. A report that claims “There is little evidence that native workers are harmed by migration” or “‘Most British regard immigration as having a positive effect on British culture” is very debatable, and one wonders where the government obtained this information.

Most of the British public do not object to a person’s religion, or the colour of their skin, but many are afraid that their country will change in such a way that they will feel like the outsiders. There are also many members of ethnic minorities who share the view that immigration levels need to be reduced, as this could obviously create potential problems for them (if racial tensions were to increase).

There can be no doubt that the voters are far from happy about the actions of their current leaders, but they need to be on their guard about the promises that will be presented by the mainstream parties, on the run up to the General Election. The Tories (just like Obama) are selling “Change,” but the change may only be the name of the Party, not the policies!