Appearing for a two day engagement on October 16 and 17, comedian George Lopez played to sold out crowds at the Las Vegas Hilton on both nights. With the lower priced tickets sold out virtually overnight, people were shelling out a minimum of $105 per ticket for George’s less than one hour show. He’s got some pretty loyal fans here; I watched about ten tickets be sold in the same number of minutes while I was waiting for my tickets five hours before the Saturday show.

Before the show started, monitors were used to play a review of his career and to promote his new late night show premiering November 9th. TBS ordered 24 weeks of the show and the 11 p.m. start time is intended to provide a jump on Dave and Conan, but after Leno with his 10 time slot. George’s late night show, “Lopez Tonight,” attempts to generate an interactive spark with a live audience and spontaneous guests like Samuel L. Jackson, Dane Cook and Sandra Bullock. 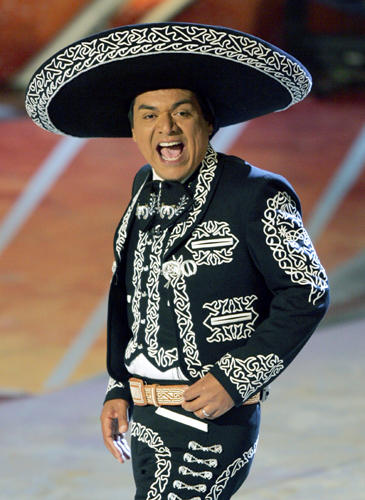 After a respectable six season run of the family sitcom George Lopez comprising 120 episodes on ABC, he’s ready for some high energy late night guests. Rumor has it that George was furious that his show was not renewed in 2008 because he wanted to wrap up some story lines. Adding insult to injury, this was the same time that ABC picked up 13 episodes of “Cavemen.” I guess George was pretty steamed about being valued at less than the “Cavemen” disaster.

George was raised by his grandmother in Los Angeles after his mother and father abandoned him. He worked his way up in comedy using Freddie Prince as a role model and got some good exposure appearing on the Arsenio Hall show. He appeared 16 times over the five years Arsenio was on the air, the most of any comic.

Did I mention he was Latino? Hard to forget, given the content of his stand up act. Slamming white people and promising that Latinos have all but taken over the United States gets some huge laughs, like having the white guy mow the lawn. Seems so crazy that it’s funny, I guess. Just as funny as beating your kid when he wants to have birthday party or how stupid whites are for talking about their kids going to college or trying to keep their kids from being hurt.

Hopefully “Lopez Tonight” doesn’t need to rely as much on ethnic humor as George’s standup routine. He’s way too talented for his energy to be cubbyholed into the Latino adding ethnic diversity to the late night circuit. It’s risky, but he’s got enough energy, talent and experience to pull it off.