On This Week with George Stephanopoulos Liz Cheney said the following;

CHENEY: But, you know, can I just point out that I think one of the things that make the American people frustrated is when they see time and time again liberals excusing racism from other liberals. And I think that, you know, clearly, Senator Reid’s comments were outrageous. And the notion that they’re being excused…

Liz Cheney who is constantly praised by Tea Party goers and race baiters like Rush Limbaugh, showed Sunday her Dad is not the only one in the family with a set of balls.

Cheney who is on the short list of Tea Party hopefuls for a 2012 Presidential run, decided to give us all a lesson in race relations. Although she forgot to check the facts before making her idiotic statement.

Does anybody remember this after President Carter accused Tea Party Goers of being racially charged? 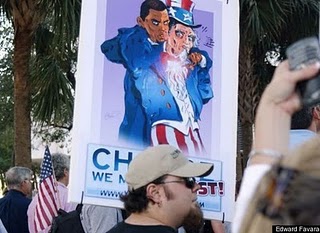 Spokesman Robert Gibbs said Wednesday that Obama – the nation’s first black president – doesn’t think that criticism of his policies is “based on the color of his skin.”

Gibbs was asked about the topic following comments on Tuesday by former President Jimmy Carter. Gibbs says some people have disagreements with some of Obama’s decisions but that those concerns were not because of his race.

We certainly didn’t see Liz Cheney criticizing President Obama about the way he pardoned the Tea Baggers who in many cases showed flat out racist behavior. But instead, we get pithy comments about what the elite of the democratic party say behind closed doors. While she ignores the racial motivated reformers of her own party, reformers who have increased her popularity on the back of racism. Her hypocrisy and flat out denial of the truth speaks volumes about the person she is, which is not a public servant but a servant to her father’s GOP.

On one hand she looks down from the mountain top scolding Senator Reid for his insensitive remarks concerning President Obama. There is no doubt Reids comments were disturbing, but for her to insinuate that Obama only forgives liberals when it comes to racism is outrageous.

Reid in a private conversation remarked that Barack Obama could become the first black president because he was “light skinned” and had “no Negro dialect, unless he wanted to have one.”

President Obama’s response to the comments;

“I accepted Harry’s apology without question because I’ve known him for years. I’ve seen the passionate leadership he’s shown on issues of social justice, and I know what’s in his heart,” Mr. Obama said in a statement, adding that the remark was “unfortunate.” “As far as I am concerned, the book is closed.”

But on the other hand, she appears all too often on the Sean Hannity show, a flat out supporter/promoter of the Tea Party Movement. A movement that regularly flashes racists signs, threats of violence, and Hitler comparisons, towards the President. But has she ever spoken out about their racist behavior? or at the very least the faction of the movement that is driven by race? In addition, she is constantly promoted and coveted by Rush Limbaugh, a man who develops his own form of an African dialect almost every time he speaks of the President, Jessie Jackson, or any other person of color who doesn’t agree with his politics. Where is her outrage towards the race baiting nature of Limbaugh? Where is her social commentary about the “don’t tread on me” bumper sticker, militia promoting faction of the Tea Party? Nope, Cheney is silent and playing politics with yet another issue of the day, with the goal being promotion of her disingenuous vision of Obama’s America.

Which is sure to find favor with her father.

Can anyone say Daddy issues?