This week, in a terrible movie set accident, cinematographer Halyna Hutchins died after Alec Baldwin fired a gun in a scene for the independent feature film, Rust. Director Joel Souza was also injured in the incident.

42-year-old Halyna Hutchins was the director of photography, and 48-year-old Joel Souza, was the film’s director.

This is a very sad situation for all involved and the many people who know or are close to Hutchins, Souza and Baldwin.

The situation appears to have been inflamed through the internet squawk box, due to Alec Baldwin’s overtly political stance over the past few years. Falsehoods and conspiracy theories are now doing the rounds, and the purpose of this story is to put out those spot fires before they become folklore.

Will Roberts, a Guinness World Record holder for Cowboy six guns, weapons expert and professional actor, helps us to unpack truth and fiction.

Roberts says that on a safe well-run set where there are guns, unionized prop and armor experts stress safety. How safe is a set with guns? “Generally, it’s extremely safe – we are always constantly checking the guns. You can’t just wave a gun around. Nobody can bring their own guns and there’s a really big misconception about people thinking that these guns are gonna go off in your hands.”

What People Say, And Expert Analysis By Will Roberts

What was Alec Baldwin doing with a real gun on set?

“The phrase ‘prop gun’ doesn’t mean that it’s a fake gun for movies. It could be a real gun that has blank ammunition. It was a real gun in this case, but we need to wait for the facts to be released to learn exactly what happened.”

Real guns are often used in this type of movie. There is no reason not to. With the right training and the right safety precautions, they are very safe.

Did he point the gun at someone on purpose?

“My guess is that he was doing the shot he was supposed to do in the scene he was doing. These things are highly scripted for safety and authenticity.”

Maybe he had the gun and it accidentally went off.

These guns and shells are the single-action type. They were the ones used in cowboy movies in the style from the 1800s, and originated from the colt 45 peacemaker.

It is impossible for these guns to “just go off in your hand” accidentally. That’s because of the single action. You have to pull the hammer back and then pull the trigger. There is no way they can just magically go off.

To shoot this gun, you pull back the hammer and then you pull the trigger. That’s the only way the gun fires.

There are 3 main types of rounds that can be in a gun.

This picture shows the difference between a blank and a live round (or a dummy load).

1. The flat top brass round in the photo above is called a blank. It has a primer cap in the back and that ignites the powder charge, but there’s no projectile

2. Number two is a real live round with a primer cap in the back, and lead at the top. The lead is the projectile that’s pushed out

3. The third type is a dummy load that looks like the live round, except that it has no powder, and no primer cap at the back. It has the lead projectile so it can be seen when the camera looks down the barrel back towards the person holding the gun. To have a blank in the chamber would not look authentic.

He shouldn’t have aimed at someone.

If the camera shot was to aim in a particular direction, that was the shot he would have been doing.

Alec Baldwin would not have just randomly decided that he was going to shoot it somewhere.

It was Alec Baldwin’s fault.

Alec Baldwin shouldn’t have aimed the gun at anyone.

When an actor in a scene aims a gun, it is pre-determined, it is done on purpose. It may be aimed at the camera – that is for the effect the director wanted to show. This is normal. And this is exactly what the actor was supposed to do, in this scene, according to what I’ve read.

Will Roberts created a short video clip explaining the single-action gun because he was starting to get people throwing out conspiracy theories about – why did Alec Baldwin have a real gun – or – maybe it went off in his hand accidentally. From the news reports available at the time, neither of these were true. Watch the video to understand more and leave comments below if you have questions! And we will try to answer them in the Monday Livestream.

Gun safety is not only important off-set, but also on-set.

Well Roberts Disclaimer: “These are my opinions based upon my experience and education and knowledge in this industry of 40 years and being a Guinness world record holder with guns of this type.” 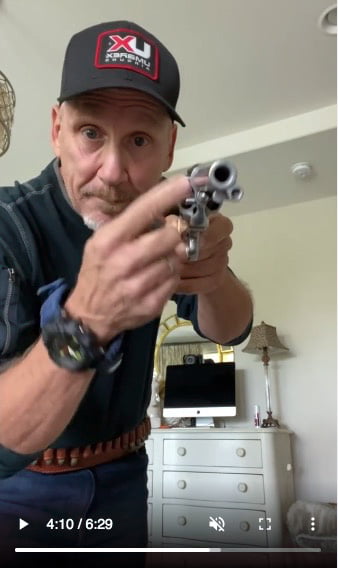 See the original video on Will Roberts’ Instagram: https://www.instagram.com/tv/CVYa4cyj6Gs/