Occupy Sacramento and other groups threaten to ‘Occupy’ KFBK and other stations on Monday, will demand to inspect station reader complaint files

Occupy Sacramento and other community groups say they will “occupy Clear Channel,” the largest radio operator in the US. Clear Channel owns KFBK and sister stations in Sacramento.

The aim of the Occupy protestors is to inspect files and announce a license challenge and boycott of the stations’ advertisers, on Monday December 12.

The Occupiers plan to hold a news conference at KFBK, located at 1440 Ethan Way, Sacramento, on Monday at 10:30 a.m. They say they will demand to go inside the studios and “inspect” the radio station’s public files.

“We will enter the building to conduct a daylong public files inspection, as is our legal right. In solidarity, dozens of Occupy and other groups from DC to LA, from Wisconsin to Florida will simultaneously converge into Clear Channel stations to demand files inspections,” said Sue Wilson, Media Action Center founder. Wilson says that Comcast has been fined $225,000 for denying public access. 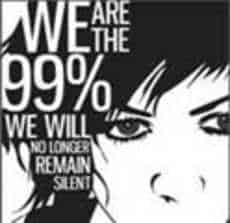 Wilson said the Sacramento region “now gets four stations promoting pro-corporate ‘conservative’ hate speech, but zero stations promoting opposing ideas; opposing views are simply not allowed by corporate owner Clear Channel, as is the case in more than 90 percent of the US.”

The Media Action Center founder says Clear Channel has been taking progressive stations off the air across the USA, in advance of the elections next year.

“Clear Channel, the largest radio operator in the US, pulled a fast one on its listeners recently in Sacramento, where a generation ago its station KFBK launched Rush Limbaugh’s career. It replaced soft rock on its 50,000 watt KGBY 92.5 FM station with a simulcast of its KFBK programming – a typical right wing format featuring Limbaugh and Sean Hannity.”

“Conservative talk radio supporters will tell us that this is all about free speech, and if we don’t like it, we should just change the channel … but what channel is left?” said Wilson, adding that with Clear Channel replacing alternative voices, there is no real “alternative” station to switch to.

The Occupy Sacramento website lists the activities of the occupy group, including tweets.