Sadly, the human species often forgets its humanity and more often than not it needs to be reminded of this characteristic value.

In Boca Raton, Florida, there is a well-known gallery named Gallery 22, owned by the artist, sculpture and Jewelry designer Yaacov Heller. Mr. Heller was commissioned by the owner of the property where his gallery is nestled to create a story about Humanity. Through quotes, marked on benches, inscriptions on plaques, statues and charming garden design, Mr. Heller has created ‘The Garden of Humanity,‘ which teaches the visitor a lesson to take to heart and to never forget.

Looking Through The Garden of Humanity

Anne Frank wrote: “Despite everything, I believe that people are really good at heart.”

The Holocaust brought about the saying “Never Again” yet, in The Garden of Humanity, which is dealing with the 20th century atrocities, from bench to bench you are reminded of the Genocides that took place. Regardless of the meaning of Never Again, to mention, the Armenia, Bosnia, Cambodia, Rwanda and Ukraine genocides and if we move to the 21st century, it is the Syria Genocide on rampage today. And the world remains silent.

On the white benches, positioned on either side of the straight garden path, the etched meaningful quotations are about the long arduous task to implement tolerance and compassion, appreciation, respect, love, lifting others in order to lift oneself, speaking kind words, counting your blessing and to never be silent in the face of evil.

At one end of the path there is a gazebo-shaped building dedicated to the Armenian Genocide of the early 20th century, that was ignored by the world.

The garden center piece, a tall Magen David-Star of David eternal flame stake, is dedicated to remind the world of all of the 20th century genocides.

The other side of the garden path ends with the statue of the artist’s artistic expression of humanity. 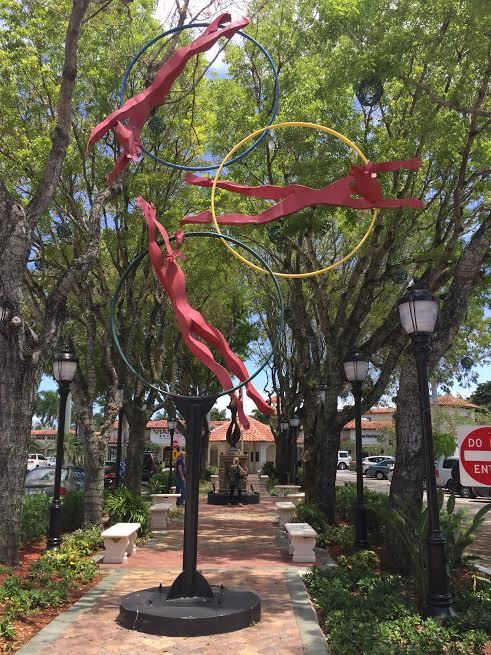 Mahatma Gandhi said: “Be the change you wish to see in the world.”

Today the world aches to see a real change for the better.

Imagination brings innovation. Imagination brought me, the writer, to found C.H.I.P (Western Civilization Heritage Israel Program), in order to help bring about the change we all wish to see in our world.

A visit to The Garden of Humanity will give you a reason to reflect and a reason to help improve your life as well as the life of many others.