The alarm about climate change is all about one degree. According to the National Oceanic and Atmospheric Administration (NOAA), global surface temperatures have increased about 1.3 degrees F (0.7oC) since 1880. Proponents of the theory of man-made warming claim that this is evidence that man-made greenhouse gases are raising global temperatures.

One degree over more than 130 years isn’t very much. In contrast, Chicago temperatures vary from about -5 degrees F to 95 degrees F, about 100 degrees, each year. When compared to this 100-degree annual swing, the rise in global temperatures since the 1800s is trivial.

Nevertheless, NOAA repeatedly raises concern about global temperatures. The NOAA website proclaims that “May 2013 global temperatures were the third highest on record.” This sounds alarming unless one understands that “on record” refers to the thermometer record, which only dates back to about 1880.

Climate changes over hundreds and thousands of years. Data from ice cores show several periods during the last 10,000 years that were warmer than today, including the Roman Climate Optimum at the height of the Roman Empire and the Medieval Warm Period, when the Vikings settled southwest Greenland. The warm and cool eras since the last ice age were due to natural climate cycles, not greenhouse gas emissions. The “on record” period that NOAA references is only a tiny part of the climatic picture.

Global average temperature is difficult to measure. The data sets of NOAA are an artificial estimate at best. They start with a patchwork collection of thousands of thermometer stations that inadequately cover the globe. Station coverage of the oceans and of the far northern and southern regions is inconsistent and poor. To cover areas without thermometers, averaging estimates are made from surrounding stations to try to fill in the holes. 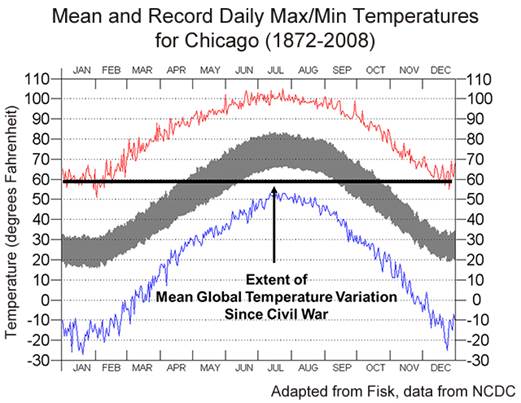 The accuracy of the US temperature record is questionable. Meteorologist Anthony Watts, creator of the science website WattsUpWithThat, led a team of volunteers that audited more than 1,000 US temperature gauge stations from 2007 to 2011. Over 70 percent of the sites were found to be located near artificial heating surfaces such as buildings or parking lots, rated as poor or very poor by the site rating system of the National Climatic Data Center, a NOAA organization. These stations were subject to temperature errors as large as 3.6 degrees F (2oC).

Simple problems can throw off gauge readings. Temperature stations are louvered enclosures that are painted white to reflect sunlight and minimize solar heating. As the station weathers and the paint ages, gauge stations read artificially high temperatures. A study published last month found that after only five years of aging, temperature stations will record a temperature error of 2.9 degrees F (1.6oC) too high. This is greater than the one degree rise in the last 130 years that NOAA is alarmed about. 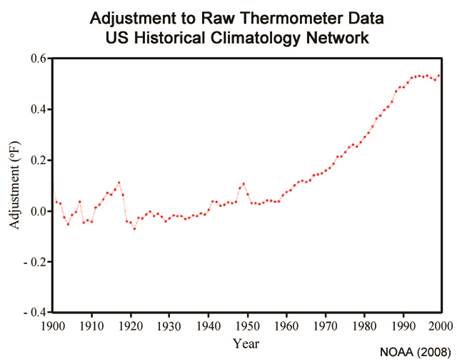 In addition to temperature measurement error, NOAA makes “adjustments” to the raw temperature data. According to a 2008 paper, after raw thermometer data is received, a computer algorithm “homogenizes” the data, adjusting for time-of-observation, station moves, thermometer types, and other factors to arrive at the official temperature data set.

This sounds good until one looks at the adjustment that NOAA has added. For temperature data from 1900 to 1960, very little adjustment is added. But after 1960, NOAA adds an upward adjustment to the thermometer data that rises to 0.5 degrees F (0.3oC) by the year 2000. This gives a whole new meaning to the phrase “man-made global warming.”

Heat waves are real just as climate change is real. But a heat record in Las Vegas or one degree of temperature rise since the Civil War is not evidence that humans are the cause.