Hats! is a funny but poignant play about a small group of women over 50, who introduce the daughter of one of the women, to their world. We learn that life is fragile, life doesn’t always work out the way we wanted it to, but we can set our own path, if we want to.

MaryAnne is 49.999 years old and she desperately wants to avoid and ignore her 50th birthday. After meeting a small group of remarkable women who show her about fun and friendship after 50, MaryAnne realizes 50 isn’t so bad. “Hats! The Musical” is based on the ideas of The Red Hat Society.

Once we pass 50, our friends start to die. We recently lost a good friend to cancer and Hats! made us think of her. We had a great evening. There was plenty of laughter, as well as a wonderful positive message. We highly recommend it. 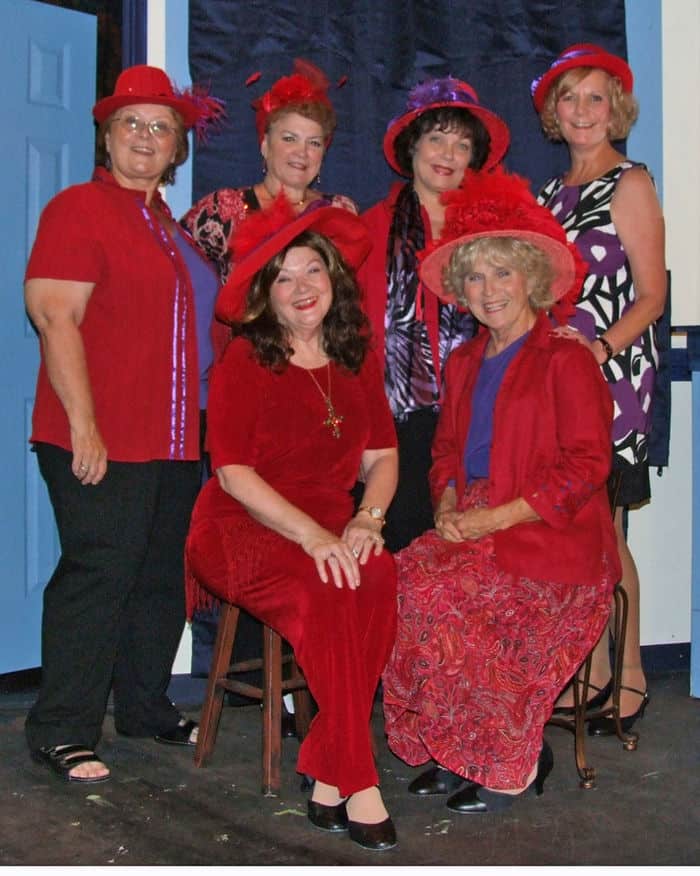 Peggy Huntsman says she is very excited to be playing the part of Dame, after playing roles in several other Stage Nine productions. She has been performing in community theatre for the past six years.

Cathy Monaghan plays Duchess, her first with Stage Nine. She has been performing music since she was five years old, singing and playing six different instruments.

Eileen Beaver is delighted to be reprising her role as the Baroness in Hats! She has performed in and around Sacramento for over 25 years in musicals and nonmusicals and she is an Elly Award winning costumer.

Amy Brandolino plays Ruby Redhat, her first time back on stage after a break raising her boys. Amy was Director of Theatre Arts at South Tahoe High, Wickenburg High, and Nordhoff High.

Kathleen Flint is thrilled to be gracing the Stage Nine stage once again, as MaryAnne. 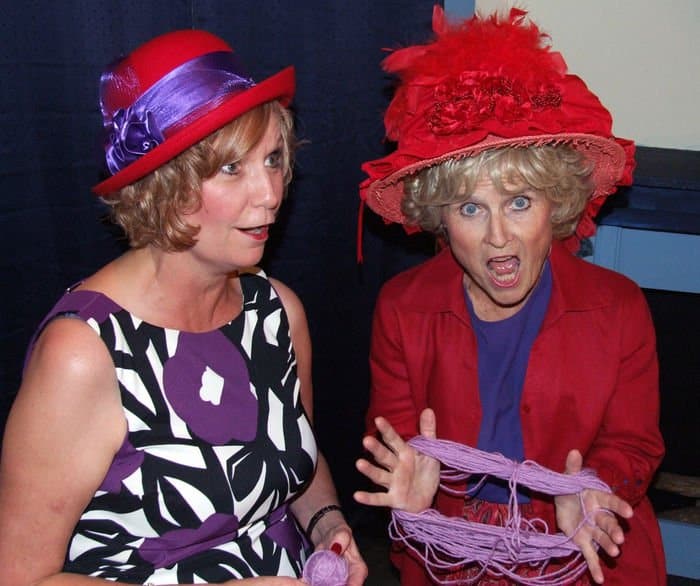 Jeanette Hall plays Princess has been performing on stage since 1996 when she was in Music Man at the Magic Circle Theater.

It all started with a red fedora and the poem “Warning,” by Jenny Joseph, whose opening lines read:

“When I am an old woman I shall wear purple / With a red hat which doesn’t go and doesn’t hurt me.”

In 1998, Sue Ellen Cooper gave the fedora and a copy of the poem as a 55th birthday gift to a dear friend. One thing led to another, and the Red Hat Society, whose members like to call a “disorganization,” was born.

Cooper says, “Magic happens every time you don your red hat and go out in public. Strangers become friendly and everybody smiles.” One of the Society’s chapters has adopted an oath that reflects what the group is all about: “To approach each new challenge as an adventure, with a sparkle in my eyes, a smile on my face and an enormous sense of humor,” and “to never wear my hat inside-out with the label showing.”

The final lines of Joseph’s poem provide a peek into the world of these joyous, fun-loving, spirited and independent women:

“But maybe I ought to practice a little now?

So people who know me are not too shocked and surprised

When suddenly I am old, and start to wear purple.”

I really enjoyed the wonderful stories and adventures the ladies of HATS! shared with me.

Hats! runs through to September 13th. Call (916) 353-1001 for tickets and to confirm times. Reserved seating is available, but you can get tickets at the door, and wheelchair access is available.