Though the Olympics were apparently inaugurated back in ancient times as a cathartic competition to replace wars, that original goal may be Greek to anybody familiar with, say, sports arena riots and surges in domestic violence every Superbowl Sunday. Or, for that matter, the movie Big Fan, a kind of Taxi Driver slice of life moody yarn, touching on the darker side of sports geekdom.

Written and directed by Robert Siegel, who also penned the brilliant and brutal The Wrestler, Big Fan stars Comedy Central standup and Conan O’Brien regular Patton Oswalt as Paul Aufiero, your basic Big Apple bottom feeder schlemiel moping his way through life while still living at the home of his grouchy widowed mother (Marcia Jean Kurtz) on Staten Island. When not on duty at a Verrazano Bridge parking garage toll booth, Paul obsesses day and night about his favorite football team, the New York Giants.

And though his successful ambulance chaser lawyer brother Jeff (Gino Cafarelli) constantly pesters the pudgy thirtysomething Paul to get a life, he’s more interested in living vicariously through star football players on the field, when not gorging on fast food to the dismay of his mother, as she stashes away endless bags of takeout soy sauce. And so stuck in his own sense of worthlessness is Paul, that he can’t even express himself spontaneously when the calling in faithfully to overnight sports shows on talk radio, reciting his own scripted soundbites instead. He also on occasion hangs with his slacker sidekick, played with the usual goofy intensity by Kevin Corrigan, as the fellow losers prowl around on the outskirts of the Meadowlands, cheering during games they can’t afford the tickets to attend. 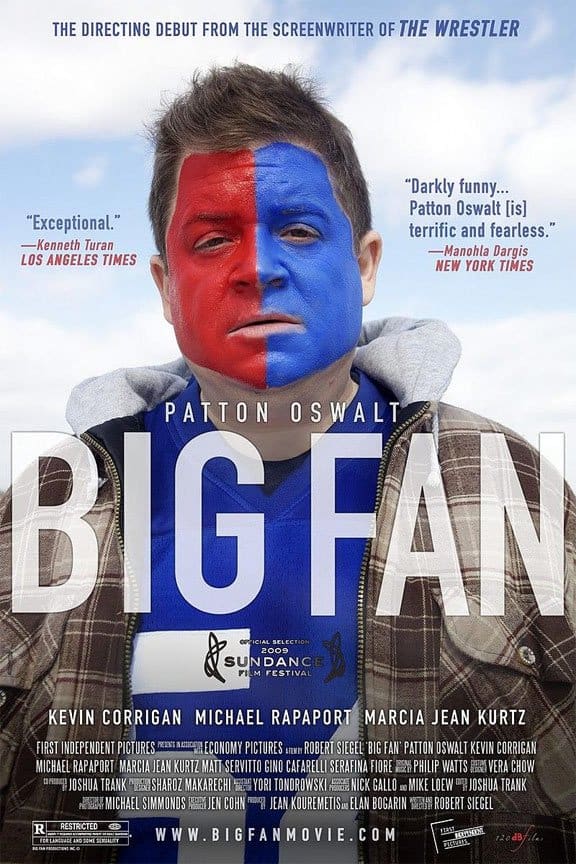 But there’s an irreversible shakeup in Paul’s excruciatingly unspectacular life one day, when he spots his football idol, Giants linebacker Quantrell Bishop (Jonathan Hamm), cruising through Staten Island. The pair follows Bishop to a swanky Manhattan strip club, which spotlights remarkable scenes that lay bare just how lost these two socially thwarted men are in the puzzling world around them, as if subjected to internal exile in their own land. And when Paul approaches Bishop for an autograph with awkward body language and words misconstrued as a threat, he’s beaten by the athlete and hospitalized.

Much of the remainder of this bitterweet, occasionally strangely comical film, focuses on Paul’s resistance to attempts by others including the police, to press charges and sue for millions, so worshipful is he of his favorite player and team, and dreading the possibility of his actions leading to their defeats on the field. As well as an eventual edge-of-madness confrontation with Philadelphia Phil (Michael Rapaport), a nutty fan in his own right of the enemy Phillies.

Lacking the potent, gut-wrenching thrust of The Wrestler, Big Fan is nevertheless a flawed but touching tale about a bruised and shortchanged existence while going through the motions of living life as a spectator sport through others. And whether intentional or not on the part of the filmmaker, there’s intriguing food for thought here as well, about the destructive nature of patriotism of the athletic or historically political kind, take your pick, that leads human beings to rebel against their own best interests, as that emotionally overpowering and potentially self-destructive herd instinct kicks in.