Almost twenty years ago, the Beijing Declaration and Platform For Action (BPFA) was adopted by consensus by 189 countries during the Fourth World Conference on Women, in Beijing. Although not a binding treaty, it calls for strong commitments on the part of the governments and other institutions to fully realise women’s human rights and gender equality through the implementation of the roadmap set by the BPFA. The 20th anniversary of BPFA opens new opportunities to regenerate commitment and charge up political will and mobilize action.

Twenty years down the line there is still an overwhelming need to position gender equality, women’s rights and women’s empowerment at the heart of the global agenda. There is a need to develop a parliamentary mechanism to look at the developments on BPFA.

Taking the Beijing+20 review process as an opportunity to hold governments to account for their commitments, and demand stronger, more effective accountability mechanisms, the Asia Pacific Forum on Women, Law and Development (APWLD) organized a Southeast Asia sub-regional Roundtable on ‘Strengthening Accountability to Women through Parliamentary Mechanisms to Implement BPFA.’

According to Ivy Josiah, of Women’s Aid Organization, Malaysia, “Women in parliament need to realize that they represent women. But quite a few of them have a tendency to go with their party diktat or what the men in the party want. So there is a reluctance to promote women’s rights and say publicly that they are for the women’s agenda. This workshop has strengthened women parliamentarians’ resolve to push for the women’s agenda in their countries, to create solidarity and support for each other and to make them more resolute and determined in their efforts. We need to have more women’s voices in the parliament not because they are women but because it is about sharing power too.”

Some of the women parliamentarians, attending the meet, shared with Citizen News Service (CNS) their experiences on pushing the women’s agenda to the political forefront. 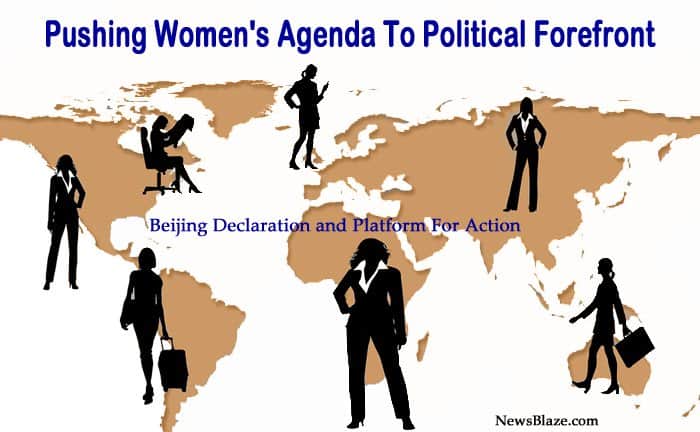 Dr Nyo Nyo Thinn, has been a Member of Parliament, Yangon region, since 2010 when elections were held in Myanmar after more than 4 decades. Lamenting that Myanmar has just 6 women out of 123 parliamentarians, she said that, “There is no national mechanism to encourage women’s participation in the government. Society is very patriarchal in Myanmar and we had been under the military regime for more than 40 years. So women have a very subordinate role in society. They are still referred to as mothers and those in need of protection. I am a strong woman advocate and call for ending gender discrimination, even as the government, bureaucrats, and many elite women disagree with me, saying that there is no discrimination against women. But this is not true. We have many discriminatory laws and we need big legal reforms.”

“A National Strategic Plan for Advancement of Women (NSPAW) was introduced in 2013 for advancement of gender equality and realization of women’s rights. However the implementation mechanisms have not been discussed. There has to be a strong accountability mechanism that can monitor and enforce at the national and regional levels. Once we get the national mechanisms and the legal reforms done, things will improve” added Dr Thinn.

Candy De La Rosa is a City Councillor of the city of Cagayan in the Philippines. A Christian married to a Muslim, her husband is a survivor of political harassment. It was big challenge for her to win that seat being the wife of such a person, more so because Muslim candidates have no room in a city council of a Christian country.

Candy pushes for equalities in minority groups, including women, whom she represents in the council. She has taken a lot of measures to advance gender equality, like passing an ordinance for more women’s participation in the council. In 2013, she won in the national elections. “I desire that more women come up in politics. There should be more women members in parliament to support and craft proper women-centric laws,” she said.

Rodziah Ismail of Malaysia, a civil engineer by profession, had been a Legislator and a Minister from Selangor state in Malaysia since 2008, but recently stepped down. “Legislators and politicians in my country are not well informed about issues around rights of women and children. Hence discussions around CEDAW, BPFA fall on deaf ears. As a Minister, I created a women’s council, which met with NGOs regularly to discuss the problems faced by women at the grass roots. We got 30% reservation for women representatives in the local councils. This way I tried to bring more women to seats of power – at least in my state. Elsewhere I cannot see the movement mainstreaming. In Selangor we have 56 constituencies but only 17 women representatives. So the women’s word is not loud enough.”

“The good thing is that now there is more awareness about gender equality. Also young male legislators are picking up this issue and understanding the women’s struggles. I think there should be at least one male member in the women’s caucus who can educate other men. Gender sensitivity will have to be created in men, even if it is with the help of men. In my country, the village head is usually a male. I called all the 423 village heads of my region and, after many rounds of discussions, was able to convince them why it was important for them to empower the village women. Now there is a perceptible change in their attitudes, and over a period of 4 years, 12 villages have women heads. Thus I succeeded in breaking a cultural barrier. Some we can do alone and for some we need the help of like-minded men.”

Ade Hartati Rahmat of Indonesia became a city level Parliamentarian in 2009 and in 2014 was elected a member of the house of representatives of Riau province, which has 18 women out of 65 members. Her vision is to promote and protect the rights of women and children.

“I am also a member of the E-Commission which looks after development in social, education, health and labour sectors. It is involved with women’s issues in a big way. As an MP, I am in a position to raise awareness of other women parliamentarians and other members to make them understand the existing situation of women in their areas. Earlier, at the city level I was able to connect civil society and grass roots women with the government and executive, through consultations, to provide services to women and children. I will do the same thing at provincial level. This gender mainstreaming is necessary for correct policy making at government level.”

“There is still not much awareness in Indonesian men and women about gender inequality. Development consultations with community involves men only. Programmes are centred more around business interests. There is an imbalance of power. Lack of access to work, poor wages and lack of education are the biggest issues confronting women. Culturally, they are not recognized as family heads/breadwinners which makes the situation worse.”

Women might be breaking the glass ceiling and walking on sticky floors, but still they are underrepresented in decision making bodies. More of them need to be there to ensure that there is a renewal of political will for a time bound accelerated action on BPFA.