Scientists believe that Ultrasound could be used as a reversible contraceptive for men, and leading researcher James Tsuruta, of the University of North Carolina was quoted as saying “We think this could provide men with reliable, low-cost, non-hormonal contraception from a single round of treatment.”

According to tests, applying therapeutic ultrasound to the testes for ten to fifteen minutes could provide protection for up to six months.

Successful tests have been carried out on rats, without causing a longer-term reduction in fertility, or causing complications, such as sperm being of lower genetic quality. Tests on humans are expected to start early next year. 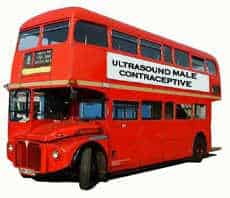 Whilst this may prove to be a successful method of contraception for men, there are of course concerns that this may encourage men to have “unprotected” sex, and so increase the level of sexually transmitted diseases.

The most well known application of ultrasound is its use in sonography to produce pictures of fetuses in the human womb, but there are many other applications as well.

In ultrasonic welding of plastics, high frequency low amplitude vibration is used to create heat by way of friction between the materials to be joined, and it makes you wonder if other forms of vibration can achieve similar results?

Could driving over a bumpy road have any effect (over a period of time), or riding on a typical British bus, which often seems like a theme park ride!

As with most forms of contraception, they only work if you remember to use them at the right time, so we should remember the saying “If you can’t be good, be careful”