While filming a documentary about death and dying for the BBC, Ray Gosling, 70, confessed to killing his lover (or as Gosling put it, his “bit on the side”) by smothering him with a pillow.

The event is supposed to have happened more than 20 years ago, but Gosling refuses to name the victim, who he claims was dying of Aids.

The BBC have been criticised for not informing the police of Gosling’s confession, which was filmed in December. The BBC responded by saying “it was under no obligation to report to police ahead of broadcast but would co-operate with the inquiry.”

Having listened to Gosling’s description of the alleged event many times and watched his facial expressions, I strongly believe that this is nothing more than a story designed to attract attention. 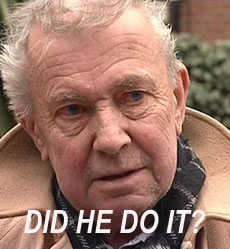 Even his account of what happened just before the alleged killing (a conversation with a doctor) seemed to differ in some reports. It appeared that in one version Gosling practically ordered the doctor to leave him with the “victim,” whilst in another you are given the impression that the doctor volunteered to disappear for 30 minutes.

Although Gosling is described as a TV presenter, he hasn’t really done a great deal of new work recently, and most of that refers to a time when he was much better known, in the 1960s and 1970s.

Knowing that such a confession was sure to hit the headlines, and perhaps bring him one last chance for fame, has Gosling made all of this up? Let’s face it, what is he risking? He claims to have helped a former “unnamed” lover to die, and at an unknown time and place. How can the police possibly charge him without more evidence?

There is no doubt the police will investigate this confession, but unless Gosling provides further information (which he has conveniently refused to do), nothing will come of this.

However, it is possible, if he is put under some difficult questioning, we might hear another confession, that the story is a hoax? His excuse may well be something to do with highlighting the right for people to have “assisted suicides,” a topic that has frequently been in the news of late.

Whilst we are used to tabloids cashing in on stories like this, some may be shocked that the BBC appear to have followed this path. As for Ray Gosling, he should either tell the whole story (as a journalist should), or withdraw his confession.

If the TV companies want to obtain higher ratings, they should produce programs that people want to watch, without including claims that cannot be proven.