For those of you pondering about the benefits of having a swine flu vaccination (and I hope you have given this some thought!), perhaps I can make your decision a little easier? DON’T DO IT!

Before you write off this request as another scare tactic based on conspiracy theories, PLEASE read all of the information provided and take the time to watch a video covering this subject (the link will be given later).

The story begins during the period 1900-1912, when researchers (funded by John D. Rockefeller) began mass vaccination campaigns. These were primarily aimed at Smallpox vaccination injections, but eventually evolved into influenza injections as well.

In 1914 war began in Europe and the US became involved in early 1917, following the sinking of the Lusitania (torpedoed by a German U-boat). Shortly after, US forces were deployed in Spain for training. 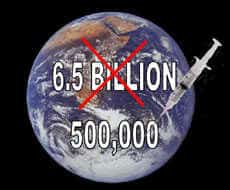 For the first time in US history, ALL new recruits were given mandatory vaccinations. One of these was a broad-spectrum influenza vaccination.

Sickness developed on the journey to Spain, which was made much worse following toxic gas “training” when the troops arrived, exposing their lungs to this gas enabled the flu virus to mutate.

As you already know, the virus became a pandemic and was called “Spanish Flu” (because that’s where it started) and was responsible for killing an estimated 50 million people worldwide. The only person to really profit from the deadliest pandemic in history was Rockefeller, who made millions from the sale of vaccines (which many believe was the cause of the pandemic in the first place).

In 1930 another toxic substance (Mercury) began to appear in vaccines (we were told that this would preserve the lifespan of the vaccine) and it is still being used today!

The company that introduced this substance to vaccines was Eli Lilly, whose director was Prescott Bush (grandfather of the former President). This may not come as a surprise to many, as Prescott Bush was accused of financially supporting Hitler.

Suspect vaccinations have not been limited to influenza vaccines, small pox vaccinations carried out in Africa in 1972 just happen to tie in with the outbreak of HIV there.

In the same year around 3 million people in the Philippines (between the ages of 12-45) were given a specific test vaccine that ruined their health. This vaccine was given by people connected with the Kissinger report and WHO.

Apparently, this same vaccine was given to Native American Indians and Black women in the US, which had a noticeable effect on their sterility levels.

If you thought the recent outbreak of Swine Flu is new, you may not be aware that in December 1976 another Swine Flu Pandemic warning was issued, after the death of just one person! 5% of those given the vaccine died immediately and over 10% were crippled, maimed or wheelchair bound for life!

In May 1987, The Times newspaper reported that the smallpox vaccine administered by WHO had in fact triggered HIV/AIDS, saying that 100 million vaccinated Africans were at risk from HIV/AIDS. The highest smallpox vaccinated areas were also the highest areas for HIV/AIDS.

It is perhaps worth mentioning that WHO are largely funded by the Rockefeller and Ford Foundations, and the Rothschild Group in London.

Immunity for Drug producers was added to a Homeland Security Bill in November 2002, which effectively means a Drug company can kill as many people as it likes and there is nothing you can do about it.

In a report in the New York Times the Gulf War Syndrome was said to be “Positively linked to vaccination of veterans.” Over 100,000 veterans contracted the “Syndrome” during the 1991 “Operation Desert Storm” and more than 20,000 have died from it, which is believed to have been triggered by toxic “squalene,” a vaccine “adjuvant” (all modern vaccines contain this toxin).

For more than 100 years “questionable” vaccines have been around, as have the “usual suspects” making huge profits from the sales.

It is hard to believe that a scientist spent 6 years of his life isolating the virus responsible for the 1918 pandemic, so that someone can release this again (if they want to), perhaps causing the death of millions. Even if it is not used as a biological weapon, is it really something we want to keep in existence and see “accidentally” let loose on the planet?

It does seem strange (more than a coincidence) that a number of potentially deadly viruses are appearing lately and the vaccines offered are equally dangerous. Vaccines that are allowed onto the market without any “official” testing, and if there has been, the reports are not good.

Perhaps this too is not surprising, as many of the people behind these vaccines are also supporters of reducing the world’s population. Not just by a few thousand, or even millions, but an unbelievable 6 billion! Some of them feel that the planet should have no more 500,000 inhabitants and be controlled by one group of people (you won’t need three guesses to know who these people are).

As there are two potential “benefits” to a pandemic (from the “Elites” point of view), drug company profits and depopulation, it is essential that the public are encouraged to have their vaccinations. Initially, this was promoted by fear (be vaccinated or die!), but some have questioned the safety of these vaccines and reduced profits, so other tactics may be employed (an increase in those infected with perhaps a new and more deadly virus).

You may have seen reports in Ukraine of more than a million people suddenly becoming infected with what might be a new strain of the Swine Flu, which has killed more than 300 people in a very short time.

Perhaps, when making your decision on whether to risk having a vaccine yourself (or allowing your kids to have one), you may wonder why many doctors have said no to a vaccination, or why very few (if any) leading figures have been tempted. If they don’t think it is safe, why should you?

My article today has perhaps more personal interest than normal, as I learned a few hours ago that one of my brothers has contracted this virus and is in critical condition (on life support). This is no seasonal flu virus, this was man-made, and those responsible (for the virus and the deadly vaccines) must be stopped. You can help save yourself (and others) by refusing these killer vaccines. There is more than enough evidence to see the dangers and who is behind these murders, what more proof do you need?