One of the hottest topics in athletics at the moment (apart from the incredible Usain Bolt) is the gender question raised against South African athlete Caster Semenya.

Semenya won a gold medal in the women’s 800 metres in Berlin by a considerable margin and has shown a dramatic improvement in running times recently. The athlete is only 18 years old, so such an improvement is not beyond the realms of possibility and does not mean that performance enhancing drugs are responsible.

Whilst the use of drugs do not appear to be the problem, the IAAF (International Association of Athletics Federations) seem to have possible doubts about Semenya’s gender and have carried out a test to clarify this. 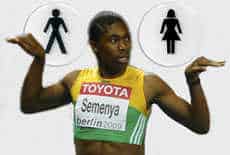 From the reaction of the ASA (Athletics South Africa) and that of Caster Semenya (taking into account the delicate nature of the situation), it would certainly seem that not everything is quite as it should be. However, we must wait for the official result of the test before making any final judgement.

Whether there is any substance to the doubts over Caster Semenya’s gender remains to be seen, but whatever the result, this information should never have become public before the completion of an investigation and the sporting authorities should take a closer look at this error.

Thankfully, the question over an athlete’s gender is not a major problem in sport, but we only have to look at the muscular form of some of the athletes (men and women) to see that drugs are still playing a part. It is extremely difficult to obtain such muscle form (especially for women) with just a healthy diet and weight training.

Obviously, extra muscle is of little help to long distance runners (who look like they could do with a good meal), as stamina is more important. But many sprinters appear to have developed their bodies in less natural ways. Quite often we see “older” athletes performing even better than they did at a younger age, and we must wonder whether this is down to improved training and technique, or whether some other factor is involved.

It is never easy to monitor all the athletes and some drugs are difficult to trace if the athlete stops taking them at the right time. However, there is no doubt that a problem exists and we can only hope the authorities find a way to overcome this more effectively.