NewsBlaze News
Home USA Health Before Antibiotics, a Cut on Your Finger Could Kill You: Those Days...

What if you took an antibiotic for a developing infection and it did not work? It is such a worry of health care practitioners and health policy makers, that the World Health Organization and the Centers for Disease Control and Prevention have named this week World Antibiotic Awareness Week and Get Smart About Antibiotics week respectively.

Most people have heard of MRSA and the dread gut bacterium Clostridium difficile, but clinicians increasingly worry about vancomycin-resistant enterococci (VRE), and resistant Acinetobacter baumannii – which so plagued US troops in Iraq it was called “Iraqibacter.”

Klebsiella pneumoniae carbapenemase (KPC) and a family of bugs called Carbapenem-resistant Enterobacteriaceae (CRE) are also growing. KPC broke out in the nation’s top research hospitals, the Clinical Center at the National Institutes of Health in Bethesda, in 2011 killing 12. MRSA caused a well publicized infection in Giants tight end Daniel Fells and has been reported found on public beaches by Florida researchers.

To a certain extent, antibiotics suffer from the “ask your doctor” syndrome – patients like to receive medications for their ailments and can feel slighted when they don’t. Most people know a cold or virus will not respond to antibiotics but they want – and can be given – an antibiotic just “in case” a bacterial infection develops. 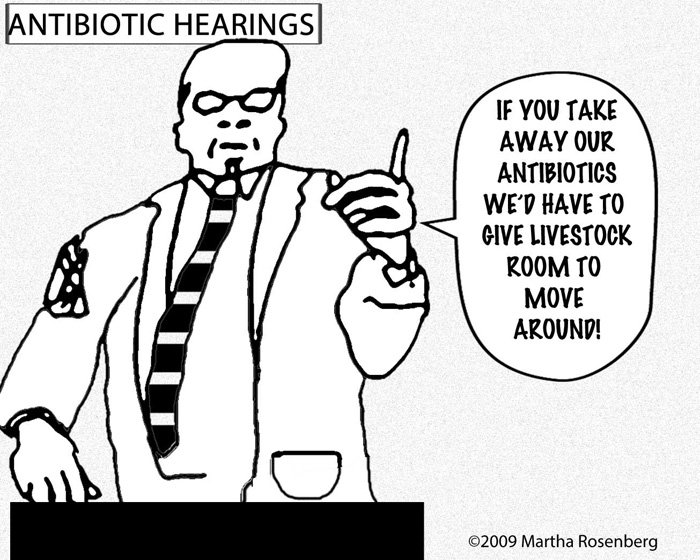 Every time that happens, the strength of superbugs can be built. Why? Because when it comes to resistant microbes, “that which doesn’t kill them makes them stronger”; the ones that don’t die become superbugs. That is why the CDC reminds people most sore throats, some ear infections and green colored mucus in and of itself and do not mean you need an antibiotic.

Still, most antibiotic resistance comes from the meat industry’s extreme use of the pills – routine daily feeding of antibiotics to livestock that allows operators to produce more meat with less feed. Because of this cost savings to meat producers (and the way antibiotics contain disease in crowded, filthy conditions) Big Food has fought government attempts to limit use-and won! W. Ron DeHaven, who had the clout of being the USDA’s top vet before taking the well-trod defection to industry to head the American Veterinary Medical Association, defended livestock antibiotics in an 18-page letter to the FDA. You can’t blame antibiotic resistance on livestock drugs he told them and you have no right to tell us what to do.

The industry group, the Animal Health Institute, consisting of Abbott, Bayer Healthcare, Elanco/Lilly, Merck, Boehringer Ingelheim Vetmedica, Novartis and other drug companies, agreed. “There is no scientific evidence that antibiotics used in food animals have any significant impact on the effectiveness of antibiotics in people.” A “bee sting” is a bigger human threat it says.

Still, 93 percent of doctors worry about the Big Meat’s antibiotic use and the risks are shocking. A University of Iowa study in 2010 found MRSA in 70 percent of hogs on farms studied and in 64 percent of workers; resistant bacteria have even been found on an unopened soft drink can in a car following a poultry truck.

An investigation by Reuters found the poultry giants Tyson Foods, Pilgrim’s Pride, Perdue Farms, George’s and Koch Foods using antibiotics “more pervasively than regulators realize.” For example, Koch Foods, a KFC supplier, claimed on its website that it does not “administer antibiotics at growth promotion doses” but Reuters found documents from the mills that prepare its feed that clearly suggested otherwise.

Pilgrim’s Pride’s feed mill records showed the antibiotics bacitracin and monensin are added “to every ration fed to a flock grown early this year,” said Reuters.

The drugs are also in the water supply. In 2010, scientists from the Southern Nevada Water Authority and other groups reported antibiotics as well as other prescription drugs were found in drinking water processed by 19 treatment plants. (Whether micro plastic beads found in cosmetics and facial exfoliating products or prescription drugs, there is increasing concern that traditional water treatment methods are not removing modern threats.)

The answer to protecting yourself from excessive antibiotics and contributing to the growth of resistance is three-fold: don’t take an antibiotic unless you have a bacterial infection that will respond to it; never flush antibiotics (or any medicine down the toilet) and reject meat grown with antibiotics.

How do you know meat was grown with antibiotics? Unless it carries a third party verification that it has “no antibiotics,” it probably was.