Introducing crackpot ideas is nothing new to the government (especially when it comes to the educational sector), but this latest one must surely rank high on the list of stupidity.

A teaching pack aimed at secondary school pupils that has been adopted by the Department for Children, Schools and Families, requires pupils to prepare a presentation on the July 7 bombings that killed 52 people.

That might seem like a harmless enough task, until we discover that the kids have to prepare this from the “perspective of the bombers,” to summarise the reasons why they thought the bombers wanted to carry out their attacks and even suggest some more.

The pack is called “Things do Change” (“Change” being the new “in” word of late), but clearly the government’s ability to introduce foolish ideas has not. 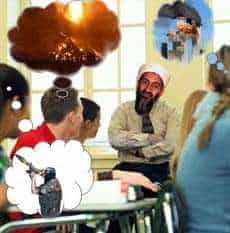 Thankfully, some people still have the ability to recognize a bad idea when they see one, such as Khalid Mahmood, the Labour MP for Birmingham Perry Bar, who said the pack risked “encouraging the sort of belief we’re trying to work against” adding “They should be looking at it from the victims’ view….Whoever thought this up has no understanding of the communities where we are fighting against extremist beliefs..” Well said!

“Things do Change” has been produced by Calderdale council in Halifax, West Yorks and its author, Sail Suleman, told the Times Educational Supplement “We’re looking at why people become extreme. Why do young people go out and do what the bombers did? Was it pressure from individuals they were hanging out with? Hopefully, we’ll encourage pupils to stay away from those individuals.”

If Sail Suleman, or the government, were to carry out a study on how violence is closely related to violent films (and video games), they may obtain their answer. Asking kids to play the role of suicide bombers is just asking for trouble!

Whilst the “pack” has been removed from the teachernet website (yesterday), it still looks as if it will be used in many schools and has been adopted by several police forces, including the Metropolitan, West Yorkshire, Thames Valley and Greater Manchester.

It would be interesting to see the reaction if this pack had asked kids to “Think like a Nazi,” to discover why they did what they did. You can be fairly certain the ADL (Anti-Defamation League) would have jumped all over this and be suggesting that those concerned take a trip to Auschwitz for some historical “correction.” Why is that?

This story also appears on the Birmingham Guide