Because it’s so difficult to tell stories about America with so many disparate cultures and perspectives in seeming barely controlled chaos, what does play out in movies is more often than not far too hermetic, or not feeling genuine at all. The intertwined tales of the immigration saga Crossing Over in contrast, face up to this formidable challenge. Which is to somehow make sense of a sea of multiple racial and cultural tragedies and occasional triumphs that define in some way, the relationship of the immigrant experience here to the impact upon it of the rest of the world.

Written and directed by Wayne Kramer (The Cooler), Crossing Over focuses in on Harrison Ford as a very different sort of reluctant, discombobulated thinking man’s action hero this time around. Ford is Max Brogan, a Los Angeles INS immigration agent conducting brutal raids on workplaces employing the undocumented. And while these exploited and underpaid workers are in effect terrorized by the arresting agents, Brogan seems to prefer to take a back seat to the proceedings, and is in turn mocked by his colleagues as a kind of INS girlie guy.

During one raid on a sweatshop, a distraught young woman (Alice Braga) being seized, begs Brogan, whom she sizes up as the only sympathetic agent on the premises, to let her retrieve her young son from a babysitter before deporting her. While Brogan makes a point of tossing the paper with the babysitter’s address that she hands him, he returns later that night to retrieve it. 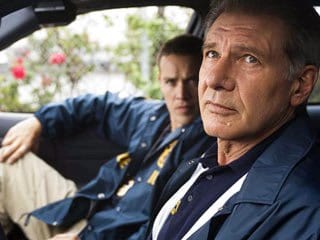 Other fascinating strands in this series of similarly disturbing vignettes, include a Muslim teenage girl (Summer Bishil, in a devastating performance) detained by the FBI and whose mostly undocumented family is threatened with deportation after she gives a presentation in class sympathizing with the courage, if not the methods, of suicide bombers; a young aspiring Hollywood actress from Australia (Alice Eve) whose visitor’s visa has expired, and who is forced into sexual favors by a sleazy middle aged and very married INS official (Ray Liotta) with a perverse schoolboy crush, threatening to turn her in; and Ashley Judd as his unsuspecting wife and a devoted immigration attorney, trying to sort out with great difficulty and emotional distress, these many heartbreaking dilemmas.

Crossing Over touches on the tragic predicaments of immigrants without papers, shedding light on the real faces and stories of conflicted human beings realistically ranging from victims to villains, beyond labels and statistics and without dramatic manipulation or preachiness. Though the film may be viewed in a rather different manner today, as the US economy tanks and many are beginning to flee in the opposite direction, back across those borders.