Recently I had the chance to enjoy some Denny Mike’s BBQ Sauce and Rubs. Dennis M. (“DennyMike”) Sherman is a native Mainer (or “Maineah,” as locals say), who is earning a reputation for creating the genuine article when it comes to authentic, Texas-style barbecue.

A self-described “Maineiac” who was born and raised in the seaside town of Old Orchard Beach, Denny has artfully combined his restaurant experience with a passion for “‘cue” that he discovered during travels with a buddy throughout Mexico and Texas. The result: A bona fide Yankee with a commitment to the best possible ‘cue around.

Denny Mike’s ‘Cue Stuff, the talented ‘cue chef’s line of hand-crafted barbecue sauces and rubs, launched in 2002 after several years in the making. During the successful run of his Maine restaurant, DennyMike’s Smokehouse BBQ and Deli, Sherman perfected the recipes and ingredient combinations for his sauces and rubs – with countless enthusiastic “taste-tests” and valuable feedback from loyal customers.

“You don’t have to be from Texas to recognize and cook great ‘cue,” Denny is known for saying. “My rubs and sauces can make an award-winning pitmaster out of anyone.”

I tried Denny Mike’s Carolina Style BBQ sauce over 2 Certified Angus Beef Bone in Osso Bucco Style Short Ribs available at the Coastal Vineyards Pork Ribs Club. They were delicious! Dennis tells us, “that this recipe was developed for their famous pulled pork sandwiches, but it’s also wicked good on all meats and seafood. Get creative with it and don’t be bashful – you won’t believe what it does as a marinade.” There you have it! Visit Denny Mikes at www.dennymikes.com 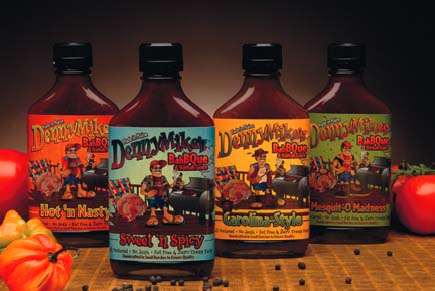