The United Nation’s Universal Children’s day (UCD) is probably just another day when the children’s rights are promoted and talked about on the major media by experts today. But in Bangladesh, the occasion is celebrated in a unique manner. Children who thrive in poverty find no reason to celebrate.

Bangladesh is a country that has been riddled with poverty driving most of the poor families to engage their children to work and earn a daily income to sustain these families.Fifty per cent of the population in Banglades remains below international poverty line of US$1.25 per day

However, the celebration of UCD by around 1,000 street children who who would have otherwise sold flowers, pop corns, fruits and other items at the traffic,may seem rather implausible. They sell items in the streets from 8:00 A.M. until 10:00 P.M at night. Nevertheless, JAAGO Foundation believes that children will be given time to smile and celebrate.

JAAGO is a charitable organization that opened its school providing free classes to slum-dwelling children with the ultimate goal of building an educated nation.

Around 2,000 teenagers and youth volunteers from the different schools, colleges and universities of Dhaka, international volunteers and participants from corporate organizations took the place of the unfortunate children at 18 busy traffic signals today.They sold their items to the passengers and drivers of the vehicles. At the end of the day, the volunteers happily returned the amounts generated to the street children. The latter, on the other hand, enjoyed the entire day at Wonder Land, one of the few amusement parks in Dhaka. 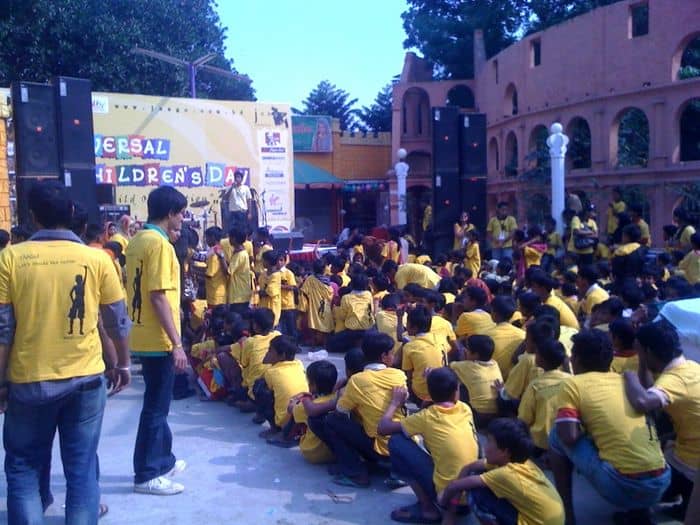 The UCD celebrations at Wonder Land Amusement park on November 11, 2010

“We have increased the impact exponentially through the UCD 2010 campaign,’ says Korvi Rakshand, Founder of JAAGO Foundation.

Rakshand added they have seen the enthusiasm of the common people at making a child smile for a day through the sheer number of volunteers who showed up. He pointed out that although the campaign required just 1,000 volunteers to replace the 1,000 kids at the signals, twice the amount showed up.

Korvi explains that the UN Universal Children’s Day, established in 1954, is celebrated on November 20 each year to encourage all countries to institute a day to promote mutual exchange and understanding among children and to initiate action to promote the welfare of the world’s children.

JAAGO celebrated the event for the first time on November 18, 2009 gathering around 500 street children from important traffic hubs of Dhaka for whom a full day of activities were arranged at Wonder Land Amusement Park. Five hundred volunteers replaced the deprived and neglected kids at the signals back then while the children enjoyed free rides, delicious food and free health checkup at the park.