This is a well structured story about the British Royal family. It’s set just before the Second World War, has a real sense of time and place and the characters are authentically drawn, all of which promise a swash buckling jaunt but, unfortunately, this promise isn’t fulfilled. The King’s Speech is something of a lack luster experience that could perhaps be compared to a date with the affectionate but dull boyfriend who’s only around because the biker with no bank account still hasn’t called.

After the death of his father, King George V, and the abdication of King Edward V11, Prince Albert (Colin Firth) ascends the throne, taking one of his middle names to become King George V1. Unfortunately, the King has suffered from a stammer all his life and is ill equipped to make the speeches required of a monarch so he turns to a radical speech therapist (Geoffrey Rush) to help him overcome his impediment. 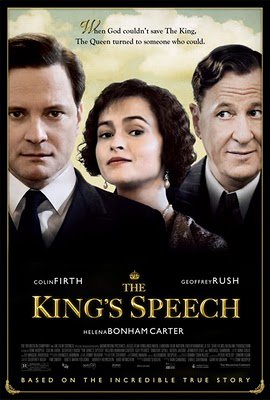 As stories go, there is nothing intrinsically interesting about speech therapy so the scenes plod from one to the next with no palpable tension and although valiant attempts are made by Firth and Rush to liven things up, it’s never enough. Also, Firth doesn’t so much stutter as make a funny noise at the back of his throat which becomes irritating after a while and I’m sure Rush would have given him a good shake had it not been for the royal protocol that prevents HRH from being touched. It’s also royal protocol for any toilet used by a monarch outside the palace to be smashed up, so how this worked when the King had his therapy at Rush’s humble abode I have no idea.

There are great performances, of course, but when actors are paid millions, this is expected, but even at this level mistakes are made and Winston Churchill’s character is taken into caricature land. And while a stammer is a serious challenge, any personal triumph of the King palls in comparison to the plight of the men about to march to the front line, ready to take a bullet for the land that is about to be mercilessly bombed. Had the timeline been set before and up to the Coronation the Brits wouldn’t have had Hitler breathing down their necks and the quandary of the King would have been paramount.

And on the subject of Royalty, our bra-burning friends seem to have overlooked the fact that when a male becomes King, his wife becomes Queen (with the exception of Camilla, of course, who won’t be allowed anywhere near a throne), but when a female becomes Queen, she doesn’t have the right to make her husband King. Or it could be that the Sisters have noticed but decided that when sexism works in your favor, it’s best to flutter your eyelashes, giggle and let the guys worry about how to get their cross up that hill. I expect Prince Philip’s got some excellent tips.