NewsBlaze News
Home USA Crime Who Knocks on the Door of Katelyn Markham on August 13, 2011?

The day before Valentine’s Day, February 13th, which was Monday, has been recognized as a six month mark since Katelyn Markham vanished from her townhouse (5214 Dorshire Drive) in Fairfield, Ohio. Images of the townhouse radiate a strange signal of what happened late in the evening of August 13, 2011. Two new missing persons’ posters are being distributed in Katelyn’s neighborhood, have been posted on Facebook, and I have them here also with my piece. 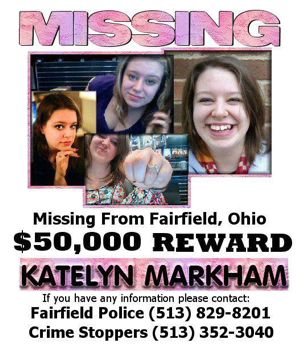 As I watched Stanley Kubrick’s Spartacus last night on my Blu Ray player, I searched on the internet for a good story to cover for tomorrow. Michelle Sigona’s International Crime Wire mentioned that it was six months now since Katelyn Markham disappeared. I reviewed the circumstances once again and took in what little new information has been made available. Really, this boils down to the 2 new flyers, which is good, but it’s not very much. Oh, also, the 50K reward’s available now!

News 5 WLWT.com, out of Cincinnati, featured a brief story which tells us that a friend of Katelyn Markham, Natalie Collins, has worked hard and thought hard on Katelyn’s most puzzling case, but hasn’t come up with anything tangible. Fox 19 briefly covered the six-month anniversary as well, and interviewed Karen Winkler (by phone only). Karen is John Carter’s mother and feels uncomfortable with the press. John Carter was (is) Katelyn’s boyfriend and fiance. John’s taken a lot of heat in the way of accusations.

John Carter is obviously a nice guy, loved (or loves) Katelyn a great deal, and doesn’t have anything to do with her disappearance. Karen told Fox he can barely go to the grocery store that he’s not stared at suspiciously by people who won’t give him a break. Katelyn’s case is very different from the average missing persons’ case. I believe she was abducted by a serial predator, but don’t have anything too solid with which to hang my hat on.

Katelyn Markham had two jobs (the Art Institute’s supply store and David’s Bridal) and was about to graduate from the Art Institute of Cincinnati. She was responsible and practical and wouldn’t just take off. Nor would anybody in the community want to do her any harm. This possibility needs to be ruled out. The best avenue of investigation (I can think of) is the fact that she and John attended the Sacred Heart Festival that day, on August 13th. Correct me if I’m wrong, but that was a Saturday.

Is it conceivable that this predator, whoever he may be, spotted Katelyn at this Sacred Heart Festival, then stalked her, until he was able to identify the location of her townhouse, which doesn’t look as if it’s too conspicuously buzzing with activity. I printed out an older story (What Happened to Katelyn Markham? by Kelsey Cano – Middletown Journal) from August in which Karen Winkler thought that someone had knocked on Katelyn’s door, when she was sleeping. I agree, this is how it must have happened. 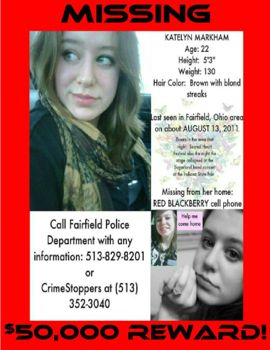 What I add, and this is a mere theory worthy of consideration, is the one doing the knocking on Katelyn’s door that night (or perhaps it was morning) is our serial predator, as has been postulated (strongly postulated, I might add) by a private investigator working out of Florida, Bill Warner. An outsider works in Katelyn’s case, not an indigenous member of the Fairfield, Ohio community. For a moment, ponder on the possibility that this predator saw her at the Sacred Heart Festival. Those of you who attended this festival, please rack your minds and try to remember all the people you saw that day. And if you saw Katelyn and John that day, do you remember anyone staring over at her?

What happened to Katelyn Markham?

Shots in The Dark: Who Murdered Perry Barefield On Mary Kay Lane? Part 2

Shots in The Dark: Who Murdered Perry Barefield On Mary Kay Lane? Part 1