Was Jennifer Trayers‘ eight-page email sent to Danielle Robins on December 4, 2010 composed and delivered before or after she stabbed her husband (Fred Trayers) to death? I suspect it was composed before she did her deed, but I could use a confirmation of this. And why did Fred tell Danielle his wife was pregnant, since this caused her to cut short the affair? Still unanswered.

San Diego is mesmerized with this ‘Love Triangle Gone South Murder Trial!’ And now a national audience is captivated as the usual talk shows pick up a naturally viral story and drive it across the air waves and the internet. The ingredients are superbly blended, spiced with the right proportions of chili peppers we so crave in the Southwest. A ravishingly ambitious and sumptuous blonde mistress verses an aging, bespectacled wife, boiling with jealousy and resentment (towards her cheating husband and cookie-cutter mistress). Nothing is missing!

Well, this is not a play, it’s not a short story, nor even a movie, for that matter. It’s the real deal! It actually happened, mainly on December 4, 2010. Or rather, that’s when the dominoes came tumbling down. The defense’s case that Jennifer threatened suicide (because of the affair) and began stabbing herself in front of Fred, until he said: “Let me help you!” is fairly preposterous. We’ll give it an audience anyway just to be fair. Yet I’m most curious about this knife? 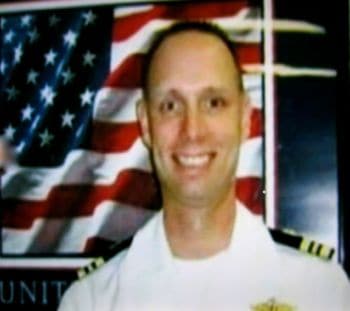 I’m staring at a photo right now of the murder weapon (published in the Daily Mail) and I sense my eyeballs are just about to pop out of their sockets! Now this is a real weapon, not an ordinary kitchen utensil. I wonder if this was Fred’s knife, which may have been issued to him when in the Navy? How did Jennifer Trayers obtain it? It looks like a hunting knife to me, with only one purpose, used to kill a fellow human being!

Another oddity (amongst many others) is Danielle Robins’ claim (when on the witness stand) that she and Fred fell short of actually having sexual relations. I’m taking this claim with a grain of salt (it may be true, it may be false). But a quote culled from a 10News article I just now read (Danielle Robins Says She Had An Affair…) mentions, when cross-examined by the prosecution, Ms. Robins at one point blurts out: ‘The clothes came off,’ referencing a visit by Fred to her room on the USS Mercy ship. 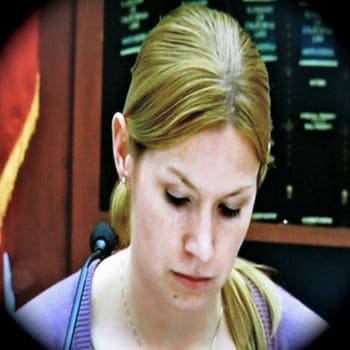 So the trial resumes today and we’ll be on the lookout for telecasts or any kind of news reports (we can get our hands on)! Better story than Casey Anthony and O.J. Simpson combined! The still emotionally wrought wife, Jennifer Trayers is slated to hit the witness stand very soon, from what I’ve heard. Sure hope we get to see the eight-page email in which she says no one will ever get her husband.

Another unexplained peculiarity is the fact that Jennifer never called 911 that life-altering Saturday night. We hear she continued to sleep with the corpse, after inflicting artificial wounds to herself to make it look as if she and Fred were in a struggle to death. How crazy is this? Necrophilia perchance? How could she lie there after she had stabbed her husband 10 times, one time right in his heart?

How much premeditation was involved here? Does this look like a crime of passion or was it well-thought out a considerable time before it was carried out? How did Jennifer discover the affair? Was she reading all of her husbands’ personal emails on his computer? Did Facebook provide any clues as to what was going on? Will Danielle survive a spot on her blouse (her reputation) since she’s now a doctor? We’ll tune in today, don’t you worry!