The disturbing contours of Urooj Khan’s fortunate million dollar lottery win, which morphed to misfortunate before he could collect his net winnings ($424,449.60), look familiar to me. Ah, there it is, the Abraham Shakespeare story (mentioned in an LA Times piece), who won $17 million in Florida back in 2006, but was murdered by a con artist, Dorice Dee Dee Moore, who poor, trusting Mister Shakespeare let handle his finances. There’s a moral in both these stories; bad luck is cloaked as good luck, when it comes to the lottery! 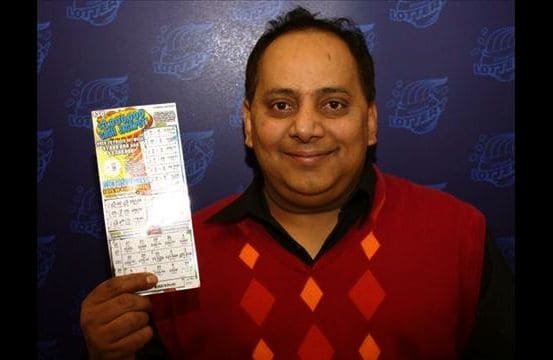 The case of Urooj Khan is just hitting the newswires late yesterday, eclipsing the Alabama shellacking of Notre Dame for viewer eyeball companionship. Yes, another irony amongst layers of irony; Urooj’s sad saga is another one of those odd mega-ball lottery winner twists of fate. Accounts of what happened to Mr. Khan last summer at Chicago’s Far North side (at a 7-Eleven, of all places), paint him as an already happy and prosperous man, owning 3 dry cleaners and a small condo real estate enterprise.

As far as the bad habit of gambling goes, Urooj had apparently kicked it to the curb, as a result of an enlightening pilgrimage to Saudi Arabia. Nonetheless, a moment of weakness comes towards the end of June at a 7-Eleven in the Rogers Park district of Chicago. Urooj purchased two scratch cards at $30 a piece from the convenience store clerk, one Ashur Oshana, who recalls his vow swearing off his former gambling vice.

But eureka! He won this time, and in his moment of jubilation, which resembles a twisted sugar high we’ve all experienced ourselves before, Urooj gives Ashur a hundred dollar bill as a token of his appreciation. Two days later, on June 26th, Khan returns to the sanctuary of Lady Fortune (our 7-Eleven) for a photo-op with the lottery people, wife, daughter, and friends at hand, taking the usual pic of a blessed man gripping an enormous mock-up check.

Not to take the scenic route away from a traffic-jammed freeway of generic-ly provided information, but how did a million dollar check get whittled down by nearly 60%? That is, how does it deteriorate from a million down to $424,000? I assume, most of this siphoning is federal income tax, but much of it must be hefty lottery fees as well. Am I too bold in stating Khan’s turn of fortune to the worst of luck conceivable, begins with the legal robbery of his winnings by the culpable parties who hatched this scheme in the first place!

Not that we need to see a spreadsheet of this scratch card accounting (although we’re most curious), what with poor Mr. Khan dying mysteriously on July 20th, after enjoying a dinner with his family when returning home from a hard days work. As you know, the startling news reported late yesterday, is that the cause of death is extreme cyanide poisoning. Was the poison administered with his dinner? How else could he have ingested the cyanide?

Is This Just a Coincidence?

I can’t think of any other way. Did his wife Ansari Khan put it in his dinner? The check would have been picked up the very next day, I assume, on the 21st. Is this just a coincidence? And was cyanide chosen since it is hard to detect by the medical examiner? This turned out to be the case with the Cook County, Illinois coroner’s office, with Stephen J. Cina as the chief medical examiner. That is, it was only after an anonymous tip came in, suggesting Urooj was poisoned, that further tests were conducted. One wonders, who was the whistle blower on this apparent murder? One might assume this would curtail lottery sales; I believe the exact opposite will be an unsavory net result.