How and when did Paul Ray Castillo escape from the apartment complex dragnet conducted by the San Jose police? It must have been earlier on in the sequence of shocking felonies. Why did Castillo hold up a man pumping gas at a Willow Glen Chevron station Friday morning? Did he shoot the man because he failed to produce any money? No one carries around cash anyhow these days.

Castillo must have been desperate for money, but why choose such an unlikely target for robbery? What other trouble was brewing in Paul Ray’s recent past that caused him to initiate this new crime spree? A half-baked scheme at best.

After the failed gas station stick up, he steals a faded black two-door Nissan and drives just a few blocks away to commit some new more serious crimes. Castillo leaves a trail of incriminating evidence behind him, as in a grainy surveillance pic, that’s good enough to identify the parolee. An unaware Cindy Nguyen, 60, was having car trouble over at The Plant shopping center parking lot.

The carjacking of Cindy Nguyen, whose 1997 Lexus ES 300 was in bad need of a jump, took place around 12 PM at The Plant. You can add on kidnapping and homicide to carjacking, since witnesses heard a very loud gunshot at this time. A confirmation of the homicide can be deduced by a reading of an updated report in The Mercury News posted this morning. 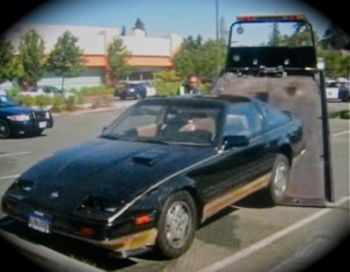 That is, Cindy Nguyen’s body (which has since been positively identified) was found abandoned in a residential garage at 8 AM Saturday (in the 500 block of North 12th Street of East San Jose). Furthermore, the suspect seems to have ties to this place where the body was found. The Mercury News didn’t elaborate any further on this assertion. Did he live there?

Is this where Castillo lived? What’s this about ties? Is this the same location where the police believe he hid out after the shoot out took place? (At the time) Castillo was still driving the stolen Lexus. Accounts of the shoot out itself could use some clarification. Did Paul Ray fire his gun at the police as they approached him, or were the police the only ones doing any of the shooting?

Did they possibly wound him? In light of the fact that Paul Ray made a clean getaway from this apartment complex, which was swarming with as many as 60 police officers, one might surmise Castillo was never hit by any stray bullets. But when and how did he slip out of this jam of a trap he had got himself into? It had to be early on.

News footage (KGO ABC7) from as late as 11:30 Friday night, show a slew of squad cars surrounding the Montclair-KB Homes Condominium Complex at Maybury and North King roads. The ‘shoot out’ occurred around 6:30 PM and an apartment resident, Rudolfo Castillo, saw the suspect make a dash for it into this vicinity of the complex. But how did Paul Ray manage to squeeze out of there without somebody spotting him?

Funny how the news isn’t reporting he got away Scott free when more than 60 police officers were covering the complex? A little embarrassing, I have to observe. But I need to back up a bit, because one item of ephemera bothers me a great deal. It’s the call that Cindy Nguyen placed to Nick Pham, the broker-owner of PN Real Estate, where Nguyen was employed. Cindy’s indication that the situation was under control is what’s so troubling!

Okay, so maybe is wasn’t Nick who actually talked to Cindy, but maybe it was? In any case, Cindy was reporting car trouble, possibly a dead battery. But the bad thing is that Cindy told her real estate office: “Don’t worry, there’s a nice person who is going to do it (give her a jump) for me.” That nice person turns out to be none other than Paul Ray Castillo.

Why would Cindy believe Castillo looks like a nice person, unless he’s a very convincing actor? I don’t know, but this is an odd twist that leaves an unsettling feeling in my stomach. And another source that’s perplexing is that Castillo’s rap sheet appears to be a trifle benign (domestic violence and drugs), when comparing it with his current crime spree.

What set him off so suddenly, especially since he managed to get out of jail on those earlier charges? How much time did he serve? Where’s a laundry list with his complete rap sheet? Why such a spontaneous outburst of desperation last Friday morning? Obviously, he was in need of dough, but holding up a poor patron at a Chevron seems like such a stupid way of getting it!

I keep checking the latest news stream to see if they nabbed him yet. No, not yet! San Jose has a low crime rate, but that changed dramatically on Friday when all hell breaks loose. I’m most certain Castillo will be captured soon, but where did he go and how many more crimes will he commit before it’s a done deal? In the meantime, we’ll wait patiently for more clarification in the news about this particular set of incidents, that are riddled with black holes of obfuscation.