NewsBlaze News
Home USA Crime How, When, and Where were Elizabeth Collins and Lyric Cook Abducted?

What happened to 8-year-old Elizabeth Collins and 10-year-old Lyric Cook-Morissey last Friday? The scene of this mystery is Evansdale, Iowa, in Black Hawk County, Iowa, which had a population of 4751, according to a 2010 census. That would make it quite rural, but with so many news reporters on the scene, trying to scoop the story of the two missing girls, that number may have doubled! 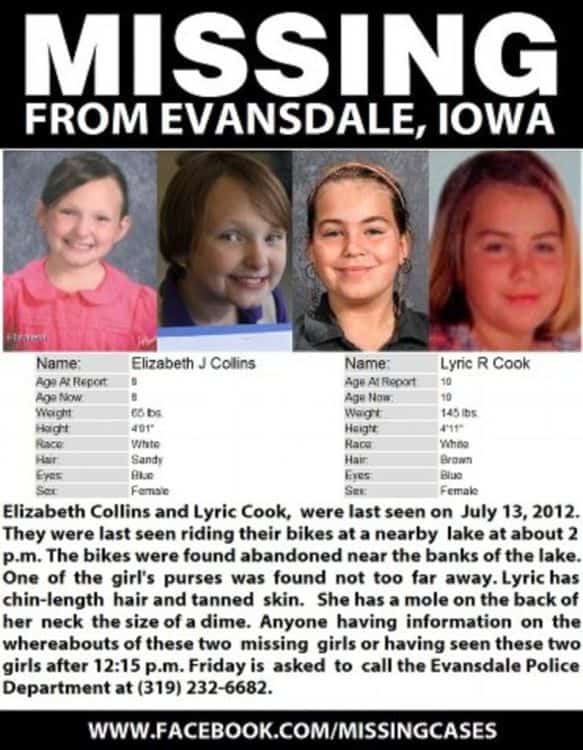 I’m studying many of their excellent reports this morning, and I’m coming to the conclusion Elizabeth and Lyric were probably abducted. We are hearing, the Black Hawk County Sheriff’s Office is draining Meyers Lake, where the two girls’ bicycles were found, along with Elizabeth’s purse, but the likelihood of their bodies being in the lake diminishes as each drop of water drains away.

Likely, you have been sifting through these telling clues (or maybe un-telling clues is a better fit) yourself, and you are sitting right where I am sitting. Elizabeth and Lyric simply never got in the water of Meyers Lake. But how did their bikes get on this trail near the lake?

A reliable reporter (who often appears on a popular talk show), who’s right on the scene, could not put together how an abductor could get these girls to go to his vehicle, from this odd position where the bikes were found.

Of course, there could be two perpetrators? The possibility of there being two parties involved in an abduction seems less likely, in my mind. Keener theories, projected on the talk shows and on internet print news (this sounds like an oxymoron, but you may glean my meaning), would rather have the perpetrator planting the girls’ bikes and purse at the lake, in order to throw the authorities off!

Alright, so now we seem to be getting closer to what really happened. But where were the girls actually abducted from, and precisely at what time did this occur? Elizabeth and Lyric were last seen at midday (ABC) in downtown Evansdale.

I suppose midday means around noon? And as far as downtown Evansdale goes (don’t mean to chuckle, but is this just a few stores and a court house?), I need to see the actual street and layout, so as to better picture the siting.

Okay, so I’m not physically on the scene to observe for myself, yet coverage of the case has been ubiquitous, and it’s quality coverage too. Both mothers and the grandmother have been interviewed extensively. All of them appear to be very good people and it looks like they have done an excellent job rearing their children.

I have been amazed at their composure, in spite of the tremendous pressure coming mostly from knowing their daughters are missing, and then some pressure (naturally) is applied from the media.

Even an aunt to Lyric Cook-Morissey, Tammy Brousseau, has spoken out how the child has been trained to fight off an abductor. Yea, my impression of both families, is that these are very solid people. Then again, is rural Evansdale, Iowa a place where lots of sex offenders live? One suspects this area is fairly crime free, but we see this situation changing quite a bit (in other areas of the country), over the past few years.

Why this is so, is hard to say. As areas of the country experience growth, crime statistics tend to surge. But has Evansdale experienced much growth the last few years? I may be barking up the wrong tree here, but how do we explain logically what happened to Elizabeth Collins and to Lyric Cook? Did a stranger wander into Evansdale? This is the only explanation I can think of.