The mystery of Fariba Amani’s disappearance on the cruise ship Bahamas Celebration, on February 29th, only deepens with what I recently learned. At least two photos of Fariba, in an obvious nautical setting, were widely disseminated by several news services, along with photos of the Bahamas Celebration cruise ship itself, that because of there juxtaposition with the ship and her story of going missing while vacationing, incorrectly suggested the photos were taken while Fariba was on this ill-fated cruise. I’m not making excuses, but I was fooled by these malapropism slideshows of incongruous photos myself.

In both of these photos, which I’m posting again for you, Fariba Amani looks rather happy. Because of what I didn’t know, or since I made some false assumptions, I concluded that Fariba didn’t seem particularly filled with angst or malicious, perhaps, towards her boyfriend, Ramiz Golshani. Now that I know these two photos of Fariba were actually taken well before her late February vacation, I can only conclude her happy demeanor was not due to a pleasant cruise experience with Mr. Golshani. 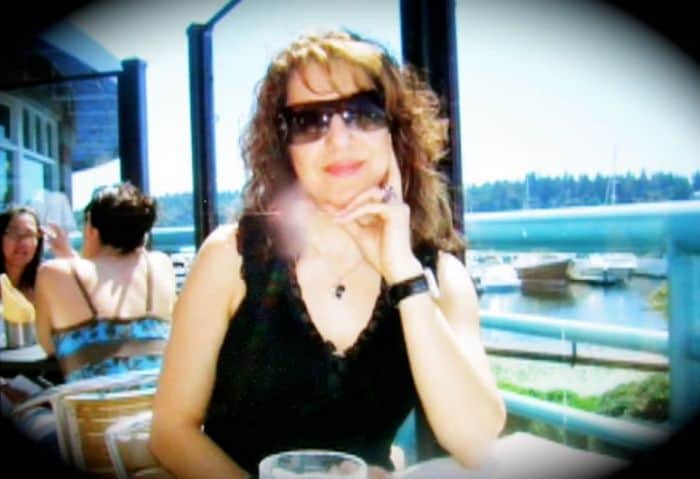 But where were these two nautical photos taken and who snapped the shots? It was probably in Vancouver, Canada somewhere, but I don’t know exactly where. Two emails from the Amani family made me aware of my error and I appreciate them telling me this problem with the photos, but I have to say, I’m only more confused by this discovery. Why didn’t the various media sources distinguish the provenance of the photos, that are not really associated with the cruise story disappearance, per se?

At least three news sources (ABC, HLN, and WPTV 5 West Palm Beach) broadcast these photo collages or slideshows (or however you’d prefer to identify this way of promulgating the news) that suggested (to me at least – maybe I’m more gullible than others) they were taken from Fariba’s cruise vacation. It’s my understanding that Ramiz Golshani has some actual photos of he and Fariba during the weeklong vacation, but those are his own private property.

I reason from this, since he wasn’t arrested and seemed to be cleared of any suspicion, his digital camera wasn’t confiscated, and these photos remain exclusively his, and cannot be viewed by either the police (FBI or Coast Guard) or by any media outlets, whether they are major ones or merely local media. The point is, we have no idea as to what Fariba’s state of mind or demeanor was when vacationing with Golshani. We do wonder, however, whether any of these unseen pix may give us a clue as to her emotional complexion.

And just now I’m remembering another item in the news which threw me way off! Molenia Golshani, who is the sister of Ramiz, had commented to CTV that she thought Fariba looked happy in some vacation photos she saw. I just assumed that Molenia was talking about the widely circulated photos of Fariba posing on what looks like the deck of a ship, with another large ship in the background. Now I suspect something entirely different. Did Ramiz show his sister the real cruise vacation photos?

I won’t assume this is what happened this time around, but I’m very curious. Was Molenia being accurate when she said Fariba looked mirthful (in whatever pix she was looking at)? Was it only me who was being deceptive (or deceived), or did major media outlets deceive the public as well, in the ways they broadcast the story? Or another possibility, is that they too were fooled into thinking the poses of Fariba were from the cruise. Anyway you look at it, we’re not getting any closer to finding out how (or why) Fariba simply vanished into thin air while on the Bahamas Celebration.