Part economic crisis cinema and part whatever character tends to tumble down the 21st century proverbial rabbit hole, The Trouble With Bliss plants its dramatic roots, however comically absurd, in a trying period. Where emotional conflict is inevitably intertwined with financial anxiety. And takes its time as well, with related coming of age predicaments that today extend ever further into adulthood, because that’s exactly where the no-prospects characters in perpetual childhood reside.

Meandering his way through this exasperating world with the future as an embellished fantasy more than anything else, is Michael C. Hall (Six Feet Under) as Morris Bliss. An involuntary as opposed to determined slacker, Bliss is chronically unemployed. A humiliating state of affairs which he prefers to characterize to others as ‘between jobs.’ 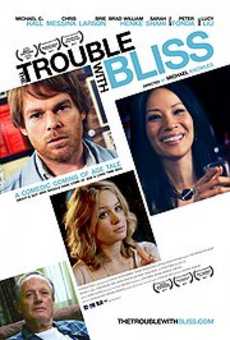 Bliss continues to live at home in a cramped apartment on the Lower East Side with his disapproving widower father Seymour (Peter Fonda), whom he is still calling Daddy. And who disparagingly provides Bliss with financial subsistence on a daily basis, in the form of begrudging handouts. While Bliss spends his days wandering aimlessly around the neighborhood. And pretending to himself and others that he regularly journeys around the world to exotic realms, that he’s really only encountered in his still cherished high school novels lining his boyhood bedroom shelves.

Not that females don’t find something irresistibly and inexplicably appealing in the glum guy, for whom the designation Bliss is anything but. Against extreme comical odds, he’s reluctantly seduced during a chance encounter in a local record shop by possible high school jailbait, Stephanie (Brie Larson). Followed by the aggressive advances of loony downstairs neighbor Andrea (Lucy Liu). Who sizes up Bliss more as a means to an end to make her inattentive, ferocious gym body spouse jealous.

In a dismal world of bleak economic prospects in The Trouble With Bliss, where the only life choices seem to be signing up for drug cartel duty – as a cartoonish chum played by Chris Messina does – or making up your life story as you go along, director Michael Knowles nevertheless manages to dredge up moments of genuinely felt humor, however dark. And even if crossing the line into lame laughs on occasion.

Though these somewhat scattered mood pieces could have substantially benefited from more solid screen time for Peter Fonda. Who is primarily pushed into the background as a character, where the stern elder patriarch alternately grumbles, naps and loses his keys.