Well, this weekend the Democrats (Harry Reid of Nevada) decided to throw a little Saturday barbecue and they invited the Republicans to help trim a little fat, or at least chew a little in the process.

Now this was not like an ice cream social where you come if you like. No, this was a mandatory picnic that the head cook and chief bottle washer (President Obama) asked that everyone attend.

Maybe the Democrats should have done this little get together at a bank, call it a hostage standoff, like it is. You know, hold some of those top Republicans (Boehner, McConnell) and tell the other Republicans on the outside that if they want to see these two alive they would have to all come together and Republicans would have to meet the peoples’ demands ( tax cuts for the middle class, and unemployment benefits).

Of course there are a few issues with this plan.

1. Republicans don’t save each other; if they are in a fix, they just get that politician out of the public eye before folks realize that anything happened.

2. Democrats would never hurt a fly, even if it was on an elephants back.

3. It would be a cold day in hell before anyone stepped foot in a bank to save anything, especially a politician. 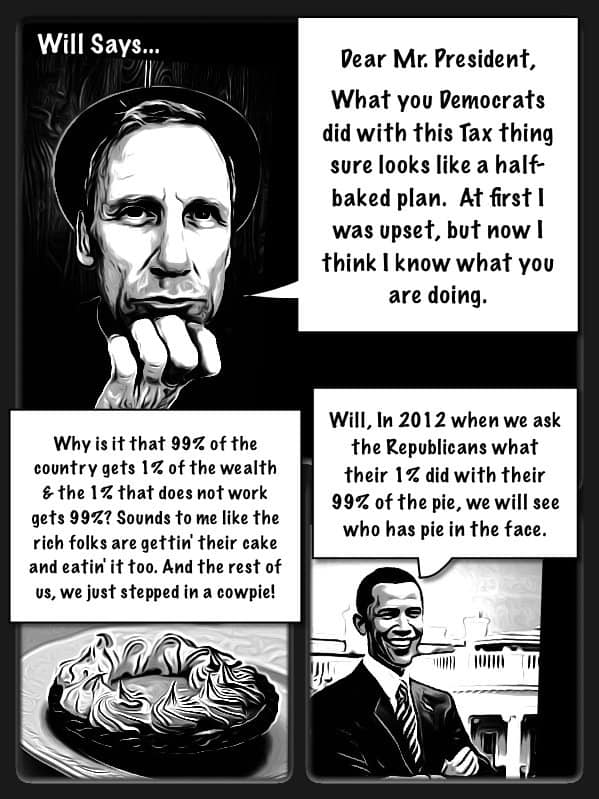 Of course like every other BBQ the other thing accomplished in the feast of political procrastination was that everyone left full… of themselves and Democrats told the Republicans to take home leftovers. Mainly because this meal was not quite done and that they needed to have it finished by the end of this week OR they get no dessert! Of course what the Democrats don’t know is that if the Republicans get their way, the Tax Cuts for the top folks leaves them with an awfully RICH dessert!

MAYBE THERE IS HOPE: This may be just another bumper sticker or a facebook phenomenon, but there is talk of another group of folks that are pushing themselves as the party of compromise. They are called NoLable.org. They are pulling the wagon on this whole compromise thing and they are saying, “Compromise is not so bad” And that we have done it in our history before. So we can do it again. Plus, they are saying that we can all come to a middle ground and solve our country’s problems. Funny thing about politics folks, it’s become a lot like Christmas. The holiday season seems to start earlier each year, so do elections and the day after it’s over, no one remembers what they asked for in the beginning.

Now, this new movement all sounds good to me, as long as they make a no dress up rule. The minute I see a march with folks in Jesus robes, or spacesuits I’m jumping ship on this idea.

I am not one to be skeptical, but I will say that if we didn’t have disagreement among our politicians, well then it wouldn’t be politics. I wonder if two politicians were to agree with each, would it be called politically correct? Then again how the words political and correct could be in the same sentence is beyond me.

Mr. President, stand tall and keep your feet planted solid this week. This tax and unemployment thing is going to hit you from all sides. It is going to make that fat lip feel good in comparison to the black eye you stand to get! Oh, sorry about the black eye pun; it was better than my Uncle John Boehner joke. I know Democrats had to compromises, but in the end (2012) it is about the people.

“All I Know Is What Little I Read On TheSOP!”