I can’t decide which is more predictable, Democrats, Republicans, or just politics in general. Now, I promise that even though I just rambled on, I won’t be going on as long as Independent Bernie Sanders did in his filibuster (seems fitting he would be an independent after Friday’s solo performance monologue). Of course they are not calling it a filibuster, mainly on account of the fact there were no votes scheduled that day. None of the other Senators wanted to speak or consider that an early Christmas present, folks. 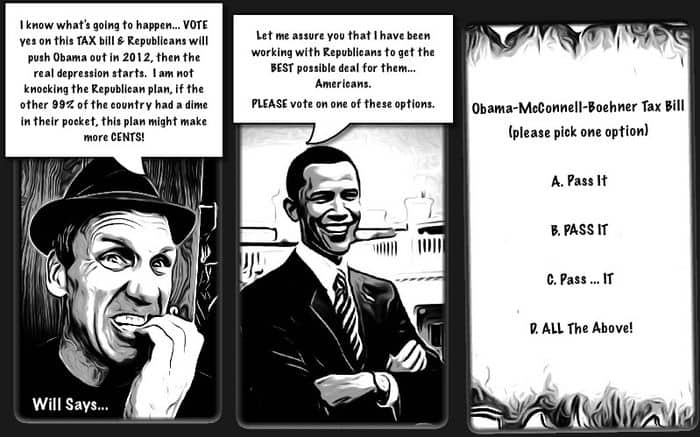 If it were a real filibuster he would be blocking Republicans from doing business or speaking. And those Republicans would be upset. However, I have never seen one of these Senators upset about not working or talking, especially after Republicans won this last election run and they’re lately getting all they wanted for Christmas (tax cuts for the rich). I mean, what’s left to strive for … hmmm, they have not picked TIME person of the year yet?

Now I have noticed through all this the President has not been looking right. Or maybe that’s the real rub. He has been looking to RIGHT and his party (Democrats) have been feeling LEFT out. I think our President is suffering from OCD: Obama Compromise Deal and from all outward appearances this condition is not contagious. It is just isolated to the President and Republicans. Although Mr. Obama is trying awful hard to rub off on the Democrats, but I am not sure it’s working.

I have every confidence that when the day is through, all Americans will be inflicted with this 2 year virus. But, let’s just HOPE our President regains his strength and pulls out the woods and gets back on the right track. He is certainly going down a one way street, however, is it the right way?

If you think you might have OCD here some of the signs of this Dis-Ease!

1. Obsessions about one’s GOVERNING body Abnormal concerns about sticky substances or residues; the bills in Senate Republicans keep blocking and he keeps sticking to!

2. Obsessive Need for Order or Symmetry: The country is cock-eyed.

4. An overwhelming need to align objects “just so” like Republicans & Democrats.

7. The inability to get rid of anything because it “may be needed sometime,” a fear of losing something – HOPE

8. Repeating routine activities for no logical reason: dealing with Republicans and the NO factor.

There are more signs however; these symptoms alone could send a person onto a tailspin. It is suggested that if you have any of these issues you might also be on the way to a much larger illness: bi-partisanship, and that is very rare and in most cases incurable!