Time Magazine’s Person of the Year is Facebook’s CEO Mark Zuckerberg. According to Time, Zuckerberg was picked because “In less than seven years, Zuckerberg wired together a twelfth of humanity into a single network, thereby creating a social entity almost twice as large as the U.S.” Time also goes on to say “Facebook has merged with the social fabric of American life, and not just American but human life: nearly half of all Americans have a Facebook account, but 70% of Facebook users live outside the U.S. It’s a permanent fact of our global social reality. We have entered the Facebook age, and Mark Zuckerberg is the man who brought us here.” 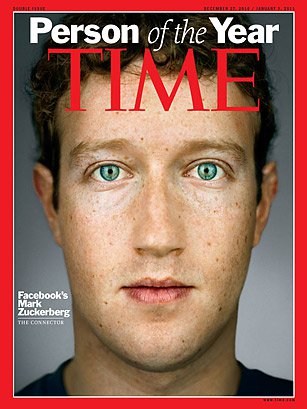 Mark Elliot Zuckerberg was born on May 14, 1984 in White Plains, New York. His parents are Karen, a psychiatrist, and Edward, a dentist. Mark and three sisters, Randi, Donna, and Arielle, were brought up in Dobbs Ferry, New York. Zuckerberg was raised Jewish, including having his bar mitzvah when he turned 13. He described himself as an atheist. Zukerberg graduated from Harvard University.