If you knock off any more of these bad guys… We won’t have to have a 2012 election!

Luckily you won’t have to have much of a plan for the 2012 race. Mainly because the Republicans have their own plan, and that is to kill each other off first!

I wrote a few months back that this Republican circus was going to make this three ring media circus look like amateur hour… Well, I was wrong! I am officially naming the 2012 election season, “The 2012 freak show!” Not very poetic, but very true. 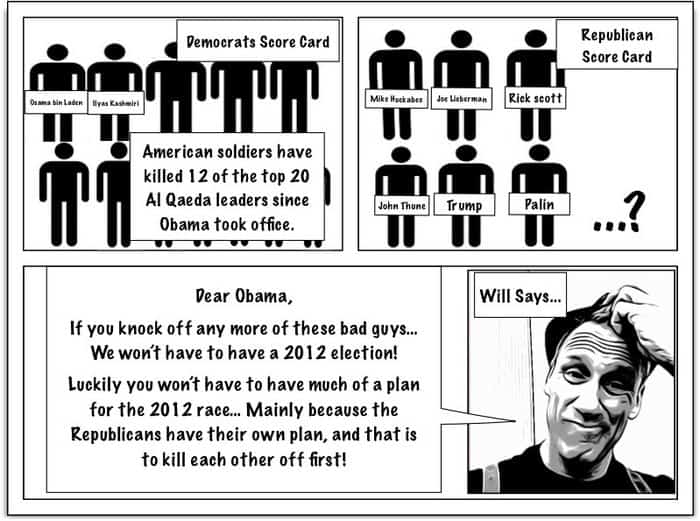 The Republican field is getting to be pretty broad. In the end, conservatives might be depending on someone who is anything but conservative when it comes to opening their mouth… I don’t want to point fingers, but I will say this person is REVERED by the GOP.

In this modern day and age American’s newest slogan is: Mom, apple pie and high speed internet. They say you can live two weeks without food, a day or so without water, but take someone’s internet access away and they won’t last five minutes.

http://www.facebook.com/home.php?#!/pages/Will-Roberts-Americas-Favorite-Cowboy-Humorist-/364791256981?ref=ts – I will keep you updated on show happenings and my humor writings and even give away cool prizes!

The FREE App is here!