Pope Benedict XVI has given his farewell speech in St. Peters Square at the Vatican. The pope asked the faithful to pray for both himself and for his successor.

In the speech, his holiness suggested that he needed to retire to a private life. The reason he gave is that he didn’t have the strength to continue all the travel and meetings required of him.

Pope Benedict has only been pope for eight years, since April 2005.

I noticed what I thought was the most striking phrase in his short goodbye message, He said he was like a boat in choppy waters. I understand he concealed his message in biblical metaphor, but it is likely he is referring to a lingering sex abuse scandal, caused by a few bad priests.

Strangely, Pope Benedict XVI never addressed these troubles in the Church. Those troubles lingered, and would not go away, no matter what.The people who were abused by priests made sure it didn’t go away.

Benedict is 85 years old, and his excuse for stepping down is his old age. But something doesn’t seem right. Is it the real reason he is abdicating? Could it be that he his completely unable to deal with this crisis of rogue priests, repeatedly committing sexual abuse with boys in their various parishes? 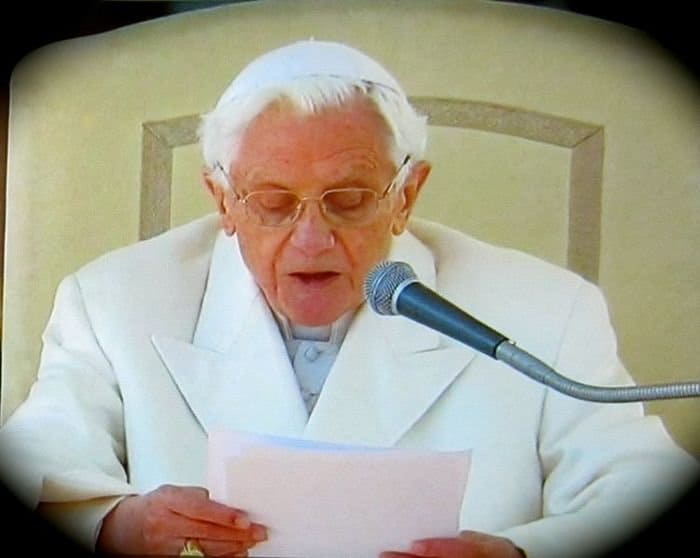 Unfortunately for Benedict, concerns among Catholics (about these rotten apple priests) have only snowballed over the past 8 years, while he has been pope! Yet Benedict is getting out of Dodge, preferring the world of studies and the intellectual process over the daily drudging moments of an overwhelming Roman Catholic bureaucracy, with a staggering 1.2 Billion members (all who need lots of ministry from his holiness). The BBC just ran a telling piece on the global demographics of Catholicism, which prods me to scratch my head in bewilderment!

Catholic Church membership has shifted to Latin America and to Africa, while Europe has experienced hyper-shrinkage. Latin America has 483 million Catholics, which gives it 43.1% of the total Church population. In sharp contrast, Europe had 38.5% of the pie in 1970, but this has shrunk to 23.7% in 2012. That’s a 15% shrinkage in 42 years! There’s a massive exodus out of the Church going on here in Europe! Why? Remember, Vatican City is in Rome, and this the heart of where people are dropping out in groves! An ironic correlation!

Well, certainly a main reason for the skepticism is the Pope hasn’t kept up with the prevailing social timbre of the times; conservative orthodoxy has persisted on such timeless topics as abortion, gay marriage, or the celibacy of priests (understandably pushing that one under the rug). Not that I care to address this obvious gap between the doctrinaire of the Papacy and the prevailing stance of millions of ordinary Catholics (if they haven’t already departed), but I’d say, a lack of Progressiveness covers it nicely!

Another profound take away from these BBC stats is that the most growth has occurred in Africa. In 1970 African Catholics comprised 6.8% of the total, while in 2012 it had risen to 15.2%. That in numbers is 45 million in 1970, then going up to 176 million in 2012. The percent gain is 12.4% in 43 years. 131 million more Africans are currently Catholics, then they were in 1970. Naturally, populations have increased a great deal over these past 43 years. Still, the stats are impressive!

Africa and Latin America is where all the growth is occurring; shouldn’t the next Pope come from one of these two regions? 115 Cardinals will have to decide in just a very short time. Peter Turkson is the frontrunner for Africa; maybe he should be our next Pope? Whoever it is, he better be more Progressive, or else many more loyal Catholics will be crossing themselves as they hit the exits for good.