The White House must have a cone of silence over it, because nobody inside there knows anything about what is going on outside.

In fact, there are many similarities between TV shows and our current government. Have you noticed that the goings on in The White House are a lot like watching “Leave it to Beaver?” Just think about an episode where Ward catches the Beaver lying. They seem to be running the same script.

Just like many other Obama administration scandals, the latest one around the Veterans Administration was no surprise to anyone paying attention. When Barack Obama was first elected, his transition team was told about the Veteran Affairs Department creating bogus wait times for veterans’ medical treatment, according to documents obtained by the Washington Times.

That was six years ago. How time flies when you’re having fun and playing golf!

The transition team learned from one VA audit that delays were “10 times worse than the department would actually admit to at the time.” The situation was so bad that the inspector general actually put oversight on the VA on hold until the information could be verified.

Now back to The Beaver script: The administration should be setting a good example for the nation to follow, but apparently they all skipped ethics class. The information revealed by the Times shows that the Obama administration works on the “deny first, apologise when caught out” principle.

Could it be that The White House contains toxins that cause Alzheimer’s? It may be the case, because they always claim innocence only to be caught red-handed later, when evidence Is revealed. Exactly the same thing happened in the “Fast and Furious” scandal, the IRS scandal, Benghazi, Solyndra and a host of others.

A very poor example is being set by this administration that Barack Obama promised would be open, transparent and accountable. What he didn’t say was that his White House would be modelled on Richard Nixon’s.

We do know that VA abuse has been going on for years, and this administration has known about it since 2009. But just like all the other scandals – and even things that didn’t rise to the level of scandal – they speak, deny and lie before knowing all – or any – of the facts. Their first reaction to anything is first to deny, rather than acknowledge only problem, or their share of the blame.

Thankfully, Freedom of Information Act requests revealed documents that prove the problem goes back to the middle of the Bush administration, but the crisis continued under the Obama administration, even though they knew about it. 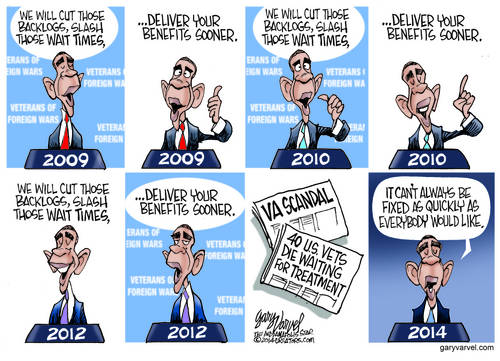 How hard would it have been for Press Secretary Jay Carney to face the media and admit the problem was ongoing? Were they planning to blame George W. Bush again?

With the FOI information in hand, The Times reported the VA inspector general undertook three audits – the fist one in 2005. Waiting times and scheduling were shown to be problems, and the Obama transition team was informed of this.

Things had been kept very quiet, but just one month ago, the scandal burst onto the national scene, after it was revealed that 40 veterans at the Phoenix Veterans Affairs Health Care system actually died waiting for treatment. That is bad enough, but what is even worse is that some of those patients succumbed to their illnesses while on a “secret waiting list.”

The secret waiting list may have been set up to conceal how long the veterans had been waiting.

If that is true, it looks like willful negligence.

Once all this information was revealed, Jay Carney said the news was the first they knew of the VA scandal. This is the same excuse he has given for other scandals, especially the IRS debacle.

Jay Carney doesn’t say these things on his own. Directions are coming from the top – otherwise he would be fired.

Why is Congress only talking about this now?

This was a signal for Obama’s handlers to spring into action and provide him with a manufactured sound bite. He ordered a widespread investigation after meeting with Veterans Affairs Secretary Eric Shinseki and Deputy Chief of Staff Rob Nabors.

Then came the soundbite, “If these allegations prove to be true, it is dishonorable, it is disgraceful and I will not tolerate it, period. I will not stand for it. Not as commander in chief, but also not as an American.”

The Beaver would love it! Another can of worms opens for the Obama administration.

So many scandal investigations are on the docket that the half of the congress that cares about these things is very busy now. When this many scandals are out in the open, it probably can’t be too long before we hear more.