NewsBlaze News
Home Thoughts Opinions Did a Painting of The Virgin of The Guadalupe Alter History?

On my calendar I see that yesterday’s (December 12th) most important event to celebrate is festivities surrounding Mexico’s patron saint, the Virgin of Guadalupe. This happens every year for me, as I’m most fascinated with this phenomenon that seems to capture our popular imagination, the retelling of Juan Diego’s vision which culminates in an image as ubiquitous as the Mona Lisa (maybe more!).

I’m okay with the story and find it credible as a real event in history, dated to mid-December of 1531, only 39 years after Columbus discovered the New World. The question comes up as to whether Juan Diego was a real person, but I’m okay with believing he indeed was for real. You have to have a little faith to believe this, but you shouldn’t hesitate in doing some research for yourself. 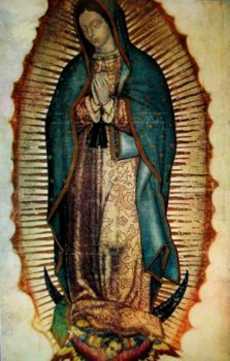 That is, if you don’t mind traveling to Mexico City and visiting some dusty archives; you’ll have to pore over many of the journals and records of the Padres from the Sixteenth Century, who kept meticulous records of their hardships in the New World, where efforts to convert the Indians to Christianity were the going challenge of the day. Come to think of it, many of these pristine Spanish documents are housed here in Austin, at the University of Texas.

What does this all mean? Why is the Cult of the Our Lady of the Guadalupe getting stronger every day? Some mysteries are meant to stay that way. Just realize it’s meant to be. But what about the image itself? What about the painting? I mean the Tilma of Juan Diego, which is still hanging in the altar of Guadalupe Basilica, Mexico City? Is it the art work itself that is propelling the growing movement of worship of the original story and its consequential ramifications for history?

Through the years I’m beginning to believe this is a reality. The image is beautiful, haunting, spiritual, transcendent. I have Virgin of the Guadalupe T-shirts, postcards, refrigerator magnets, art prints, and even coffee coasters. Don’t have a VG mousepad, but aim to get one. Tesoros Trading Company over on Congress is the place to go to if you want Virgin of Guadalupe stuff. I always need some more.

The identity of the artist of the original Tilma is unknown. Apparently, the cloth on which the image was painted on is made out of cactus. He/she used both oil paint and then tempura paint for the turquoise cloak, that plays such a big role in what makes the image utterly compelling. Writers have suggested the persistent endurance and survival of the painting itself is a major miracle!

Had it not been for the creation of this image in a miniature painting, I doubt that this tremendously forceful movement (or cult worship) would still be alive today. Here I’ll argue that Art plays a centrifugal role in propelling history forward. I don’t sense you’ll be able to negate this Maxim when looking at the history of a munificent image, against the dramatic metamorphosis of 500 years plus, when the conquering Spanish brought their Christian zeal (and violence) to the New World.

Recollections of what happened to Juan Diego a little less than 500 years ago coalesce in the taintless image, in an original painting hanging in Mexico City. At times Art can play a pivotal role in moving history forward. What would the Catholic faith be today without Our Lady of the Guadalupe? It might be dead! An unknown artist was able to alter the course of history with some simple, agile strokes of a paintbrush. Washes away the sins of the Spaniards.