NewsBlaze News
Home Thoughts Cartoons No Need For Guns, We Will Protect You

With a big smile on his face, Sheriff Scott Israel told Americans law enforcement would protect them. That means there is no longer any need for law-abiding citizens to have guns. The Second Amendment is therefore unnecessary. There is no need for guns now.

Unfortunately for the Sheriff, past history proved him wrong. Practically every single mass shooting in the past 20 years has shown a failure by law enforcement. 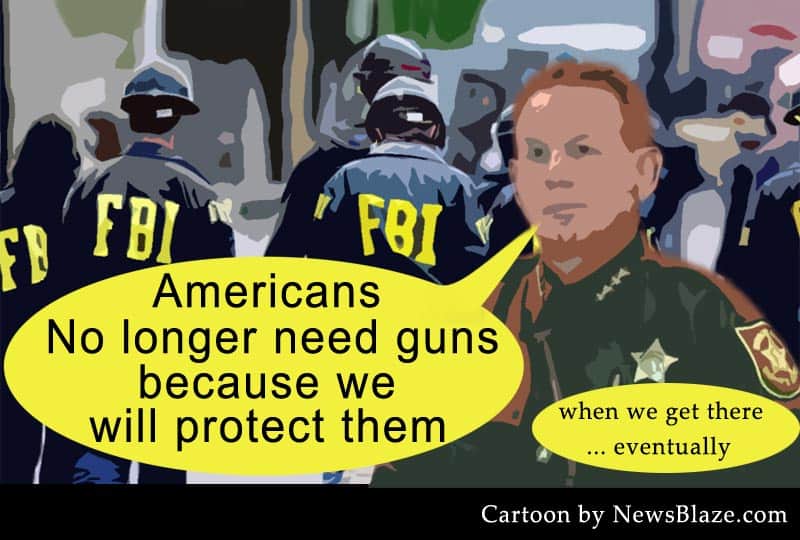 It turns out that Florida schools and Florida law enforcement were receiving federal money because they successfully reduced crime over the past eight years. At least that’s what the statistics showed.

First, they just ignored minor infractions. Instead of arresting people, they just gave a warning. Such was the success of this plan that their funding increased, and they felt they were doing some good for the community.

So they went further, and stopped arresting people for misdemeanors. The crime stats went down and they got more funding. But the problem is, when there is a trend, it must be continued. So they stopped enforcing the law for more serious transgessions.

So here we are today. Law enforcement failed to act, even when a killer’s family asked them to intervene. And now there are 17 dead teachers and teenagers.

Media talking heads appear to believe that, because they keep pushing this line. But the media is no longer the investigative fourth estate it once was. Big media is now a controlled entity that attacks on command, ignores what it is told to ignore. Big media also pretends to be the fourth estate, but clearly, it is not. That is the saddest thing of all for anyone who thought they could trust the media to be impartial.

Thanks to @TheLastRefuge2 for information and links to the documents that prove this. See this thread.

It is possible, perhaps even likely, that the problem with not taking action on students for misdemeanors also applies to the Trayvon Martin case. The only information I have seen indicates that Trayvon Martin has been in trouble with law enforcement for using marijuana and one other case.

As some people have suggested, this is a way to teach problem students that they will not be held responsible for their misdemeanors. That means this kind of policy can reduce crime statistics while at the same time creating lawlessness. Problem students quickly learn they can carry on as they like and do bad things with impunity. At some point, the piper must be paid.