When a black woman reporter was ejected from the area around Air Force One, there was very little fuss. Nobody cared.

That’s why it seems very strange that anyone cares about loudmouth Jim Acosta having his White House hard pass withdrawn.

Acosta argued with the president, made statements rather than asking questions. Brenda Lee didn’t get to ask any questions, didn’t make a fuss, didn’t grab a microphone and tussle with an intern. Acosta is a loudmouth, Lee is placid.

But they carried Brenda Lee away like a sack of potatoes.

Is the difference “white privilege?” 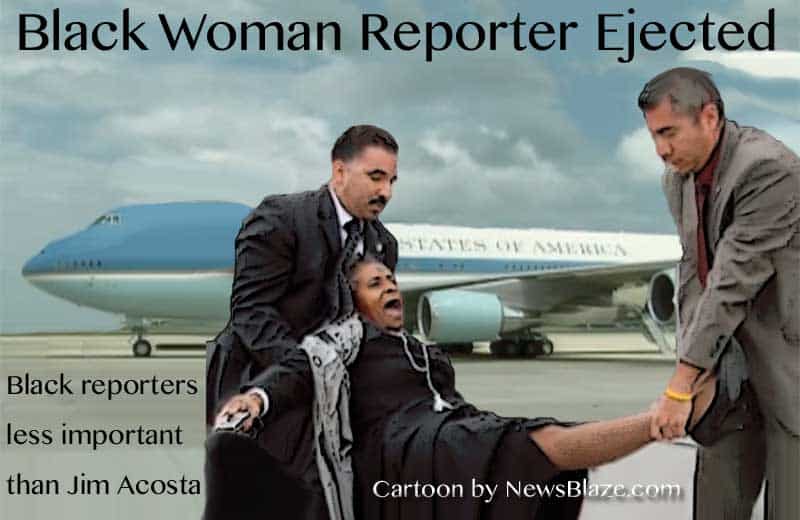 If not white privilege, what was the difference?

Lee is a woman, Acosta is a man.

Brenda Lee is placid and quiet, Jim Acosta is a pushy loudmouth.

Lee is conservative, Acosta is liberal.

In Brenda Lee’s case, the president was Obama, in Jim Acosta’s case it was Trump.

She provoked security by standing on a photographers stage, he provoked everyone by shouting, holding the microphone and refusing to give it up, pushing an intern away and being disrespectful.

But nobody on the left is standing up for Brenda Lee.

What a difference ten years makes.

The left stands up for the press, unless they are conservative.

The left stands up for women, unless they are conservative.

The left stands up for blacks, unless they are conservative.